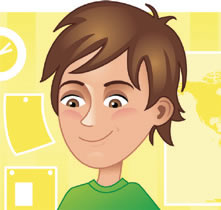 1. We don’t like to be compared to other kids. When you compare us to little Timothy down the block saying how smart and well-mannered he is, it doesn’t make us feel good. We like to be appreciated and complimented on our abilities. It may not seem like it but being complimented is one of the best things you can say to us.

2. We have our own sense of humor. You may hear us cracking up about something that doesn’t even make any sense to you and you’re racking your brain trying to figure out why it’s so funny. But don’t bother! We have our own sense of humor that sometimes doesn’t make any sense. For example: I was with my friend, Pedro, and we started laughing and his mom asked us what was so funny and we explained it to her but she didn’t have the slightest idea why it was funny.

3. One of the most important things, don’t try to act our age! We don’t think you’re “hip” when you’re saying cool, rad, or dude in every sentence. Just act your own age. We’d rather you ask us if we want to play “stickball” then you asking us if we want to go hit up the clubs. Another example, one of my mom’s friends was with me and asked if I wanted to go shred down at the skate park. That is a prime example of overdoing it on the whole “be your child’s friend kind of thing”.

4. We don’t want a lecture as a response to a yes or no question. You don’t have to yell at us for five minutes about how bad or wrong that is…just say no. Oh and another thing, I’m pretty sure none of my friends would jump off a bridge and even if they did, I wouldn’t. So the next time one of us goes up to you and asks a question, just say yes or no.

5. Bullying is more of a problem than any adults can even fathom. The media blames schools or the parents, saying that bullying is a minor problem that is rising but guess what? It’s actually been a huge problem and has been for awhile. The problem is that most of the victims are afraid to speak up. Bullying occurs between everyone and happens everywhere. Guys bullying guys, girls bullying girls, guys bullying girls, and even girls bullying guys. Another thing, telling the principal and calling up the bully for confrontation is probably the worst idea ever. If you snitch, it will more than likely get remarkably worse. Trust me, bullies don’t learn their lesson. They will keep at it until either you fight back or they are expelled.

6. Let us have our personal space. If we want to be alone, then please let us be. It’s not like we’re plotting world destruction. I know some adults worry about their kids falling in with the wrong crowd or getting into bad habits, but you just got to have faith in us and have confidence in how you raised us. You raised us better than that.

6-1/2. It may seem like we don’t want to be hugged or loved, but inside we do. We’re just trying to act tough and grown up, but we always could go for a big ole’ hug.