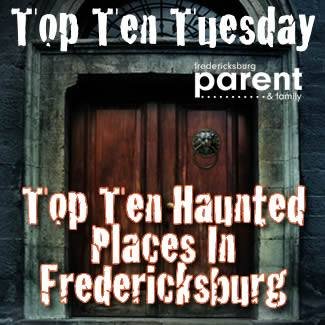 Fredericksburg, VA, is a town rich in history. It played important roles in both The War Of Independence and The Civil War. Fredericksburg was also home to many important historical figures, namely, George Washington and his family. As you can imagine, this sweet little town is ripe with ghost encounters! Since we are smack in the middle of October, we think it’s just the perfect time to reveal our top ten haunted places in Fredericksburg and their stories. So pour yourself a cup of coffee and settle in for some spooky, local ghost stories!

1 St. Georges Episcopal Church- The haunting at St. George’s is a rather famous one here in Fredericksburg.  Ghost hunters come looking for a mysterious red room that seems to appear but does not exist, doors being slammed, pews being turned over, and the mysterious figure of a woman wearing white (4). “It was early one evening in 1858 when this ghostly specter first appeared. A young woman who sang in the choir, Miss Ella McCarty, arrived early for practice and found the church nearly dark. While her companion and the church organist searched for more lamps, Miss McCarty ascended the stairs to the choir loft where a single lamp was burning. Glancing down into the church vestibule, Miss McCarty was astonished to see a lady in white, her face covered by a veil, kneeling at the altar. The mysterious woman rose from her prayers, turned and looked at Miss McCarty. Beneath the veil, Miss McCarty saw the woman’s sad and troubled face. Just as Miss McCarty was about to call to her, the lady in white disappeared into the air. Her identity remains a secret, for she was never seen again.” (1)

2 Virginia Hall- University of Mary Washington.- There have been multiple reports of seeing the ghost of a young man walking up and down a hallway in this all girl dormitory. There has only been one report, however, of the ghost making contact. “ [There were] a pair of roommates on the second floor of the dorm towards the front. Both girls had been seeing a guy walking down the hallway near their room. Neither one of them wanted to say anything because they believed they had both been seeing things and since they didn’t know each other very well, neither one wanted to be the “freaky” roommate. One night, one of the roommates woke up randomly in the middle of the night. Looking over at her roommate, she saw the figure of a man leaning over her with his hands around her neck trying to strangle the girl. The woken up roommate began to scream which woke up the girl and the ghost disappeared. The girl claimed she felt nothing but on her neck were large red marks.” (3)

3 Chatham Manor (est. 1771)- Sitting high above The Rappahannock River, Chatham is a beautiful manor that has hosted many important historical figures such as George Washington, Abraham Lincoln, and the Marquis de Lafayette. It has also hosted one very interesting figure – an apparition of a young English girl, dressed in white, who appears at midnight every 7 years. “She was brought to Chatham by her father, who wished to sever the young woman’s romance with an English drysalter. Despite the enjoyable social life of the Virginia estate, the girl pined for her lover. The young drysalter followed her to America, however, and the lovers secretly planned their elopement. Finally the chosen night arrived. The young man silently moored a boat on the Rappahannock and cautiously placed a ladder against his love’s window. But instead of climbing down into the arms of her beloved, the young woman found herself enveloped by General George Washington. A guest at Chatham at the time, the general was informed of the elopement plans by a servant. Washington had the drysalter arrested on that fateful night, and returned the girl to her father’s custody. Taken back to England by her father, the girl ultimately married someone of a more suitable social standing. But she never forgot her true love or the events at Chatham, and vowed to walk her favorite path on the anniversary of her death.” (1)

4 Kenmore Plantation (est. 1752)-  Legend has it that Kenmore Plantation is haunted by Colonel Fielding Lewis, the husband of George Washington’s sister, Betty. He “spent many an hour in the upstairs bedroom worrying about money. His ghost can be seen in Revolutionary-era attire poring over his documents. His footsteps have been heard as well, and dorrknobs mysteriously turn by themselves.” (2)

5 Fall Hill Plantation. – Is home to the kind spirit of a Sioux Indian princess named Katina, who worked for the Thornton family as a nanny to their many children until her death in 1777. “Witnesses have described Katina’s apparition as well as moving shadows, disembodied voices, electrical anomalies, and doors opening by themselves. Katina’s body is rumored to be buried somewhere on the premises.” (2) According to multiple sources, her haunting always seems to be benevolent and curious, and should not be feared.

6 The Chimneys (est.1772)-  Perhaps the most intriguing haunting in Fredericksburg is that of The Chimneys. Multiple businesses have attempted to set up shop in this location, only to mysteriously close a short while later. The identities of the ghosts and their stories remain a mystery. They are however… active. Items have been broken, doors slammed shut, empty chairs have been seen rocking, and ghostly footsteps have all been noted throughout years of haunting at The Chimney’s. “A music lover must be among the group [of ghosts], however, for it chose to visit during a young girl’s musical performance. Alone in the house, the girl was softly singing and playing the piano when she heard the front door open. Foot steps resounded across the hall and into the room. Then the girl felt someone sit down beside her on the piano bench and touch her on the shoulder. The girl watched and and listened astonished, for no one was to be seen during the entire episode. Another ghostly visit occurred sometime later, but this spirit made a visible appearance. Late one evening, a mother went to check on her young son as he slept. Entering his room, she was surprised to see two young boys sleeping in his room. Someone must have come to spend the night without her knowledge, she thought, although she did not recognize the child. In response to questioning the next morning, her son declared he had slept alone that night, and no signs of the ghostly overnight guest could be found in the boy’s room.” (1)

7 Mannsfield-  During the Civil War, Mannsfield served as a hospital to Union and Confederate troops, at different times. Now, it’s believed that the spirits of several of those soldiers haunt the property. A clairvoyant woman used to live near Mannsfield and claimed to routinely see the spirits of uniformed men as they stood guard, tended to their horses, or cared for wounded soldiers.

8 Rising Sun Tavern (est. 1760)– Much like Fall Hill Plantation, The Rising Sun Tavern is haunted by a kind spirit. The ghost is believed to be former colonial owner, John Frazier. Mischievous and playful, he has been known to flick lights on and off, spin hats around, pull the rug out from under people, and tug on dress hems. The spirit of Mr. Fraizer is most active during the holidays.

9 Federal Hill- Named after the Federalist Party in 1792, Federal Hill is home to the spirit of Governor Alexander Spotswood, a colonial statesman and leader of the Knights of the Golden Horseshoe. The ghost of Federal Hill is a friendly one. The Governor can occasionally be seen mixing himself a cocktail (his favorites were apple toddies and egg nogs) and toasting to his own portrait. No flipping over tables and breaking china for this peaceful apparition. Cheers!

10 Sunken Road- The history behind the haunting of Sunken Road is a bloody one.  “The Battle of Fredericksburg, fought on December 13, 1862, marked another unsuccessful attempt by the Union army to move south against the Confederate capital at Richmond. This failure stands out among other such setbacks because of the overwhelming nature of the Federal defeat. Here, along the Sunken Road, Robert E. Lee earned his most one-sided military victory.” (5) Indeed, The Union army suffered one of its bloodiest defeats during the entire Civil War. Total Union casualties were 12,600 killed, wounded or missing in action. Most fell in the effort to take the stone wall and Sunken Road. Confederate losses were 5,300 (6). As you can imagine, there have been several reports of people hearing gunfire, voices giving commands, and visions of soldiers wandering amongst headstones. Some claim to even hear ghosts whispering in the cemetery.

Do you have any good ghost stories to share? Have you ever seen one of these local, ghostly residents?

If you are interested in doing a guided ghost tour, we suggest signing up for one with “Ghosts Of Fredericksburg.”

The Fredericksburg Battlefield Visitor Center is open year round, from 9:00am – 5:00pm.

Provided by Parent Education-Infant Development, a program of the Rappahannock Area Community Services Board   During the first three years of a child’s life, the...
Read more

Four area experts talk about trends you can look for in 2023   Remember all of the anticipation and fanfare that we entered the ‘20s with...
Read more
Editor's Note

How we handle tough times leaves an impression on our kids   Welcome to 2023. If you've been keeping score, this decade we've endured a pandemic, parts...
Read more
Load more