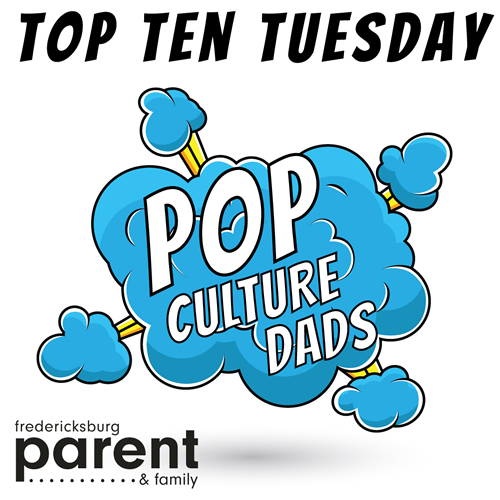 There’s so much to be said for a good dad. In honor of Father’s Day, by staff compilation, our staff has put together our top 10 Pop Culture Dads. Tell us who YOUR favorite Pop Culture Dad is, and you could win a book of oral histories from Virginia WWII veterans, perfect for the history-buff dad in your life.

1. Our favorite helicopter dad award goes to Marlin, the clown fish, from Disney’s Finding Nemo (2003), who overcame his anxiety disorder to pursue his son across the ocean.

2. The best dad in a crisis award goes to stockbroker Chris Gardner in Pursuit of Happyness (2006), played by Will Smith. Despite homelessness and balancing work and childcare, Chris overcame the odds.

3. The large family dad award goes to Mr. Weasley from the Harry Potter series. Arthur Weasley is the muggle-obsessed father of seven children who still makes room in his heart for Harry.

4. Our superhero dad pick is Hawkeye of the Marvel Universe Avengers. “Hawkeye” Barton is truly the most “human” (and maybe the hottest?) of the Avengers.

5. If you need a dad with a “very particular set of skills”, Brian Mills in Taken (2009), played by Liam Neesen, is the dad for you. Kidnap his daughter, and he will find you.

8. The traditional values dad award goes to Robert Crawley, Earl of Grantham, on Downton Abbey. You can always count on the Earl to arrive at dinner in tails.

9. The funniest dad award goes to How to Dad YouTube star Jordan Watson. The New Zealander has a funny take on the challenges of parenting.

10. The best dad hair prize goes to Mufasa from Disney’s The Lion King (1994). There was no bald spot to be found on that king of the jungle.

Our honorable mention goes to our favorite bald dad, John McClane, played by Bruce Willis, in the Die Hard movies. Wanna talk about a dad who protects his family? McClane is your guy.