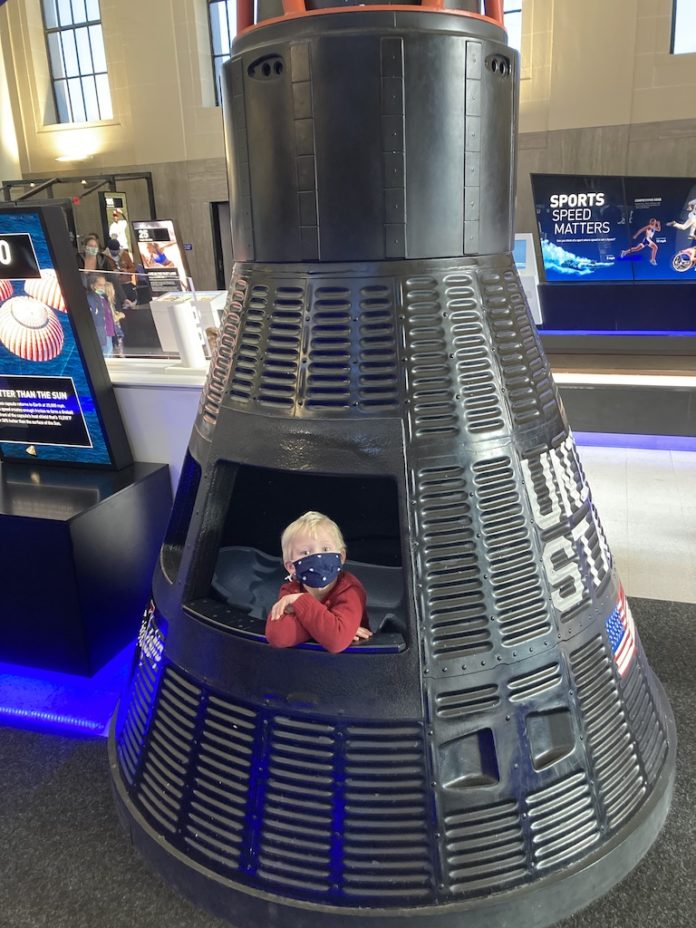 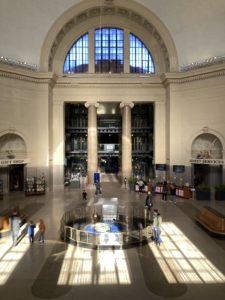 We packed the kids in the car and drove the hour to Richmond in the late morning. Immediately inside is a big beautiful multi-story lobby with lots of open space for the kids to run around. There’s a big Foucault Pendulum in the middle—a pendulum that slowly moves in a circle as the Earth turns under it. We got there in time to see it knock over one of the little pegs that surrounded it to show its movement. You wouldn’t think it would be that exciting to watch a big brass ball knock over two inches of rubber, but with a 4-year-old’s energy beside me, we were cheering when it finally fell. 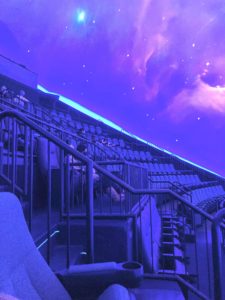 tarted off the trip in The Dome, their giant hemisphere movie theater. It’s the biggest screen in Virginia! We watched a movie about the creation of Earth. The giant wraparound screen made it feel like we were really flying through the solar system’s primordial planet-forming dust cloud and were there on ancient Earth as another giant planet plowed into us to form the Moon. Benny loved it! Lily fell asleep. It’s never a bad thing to have your adorable 1-year-old daughter fall asleep in your arms.

From there, we went to their current temporary exhibit: hot wheels! There was a whole section about race cars, race safety, car physics, and engines. There were lots of hot wheels cars to play with too. Both 4-year-old Benny and 1-year-old Lily had a blast playing with the cars. I’m fact, Lily seemed like she would have happily run cars down that ramp all day. I’ll have to get her some hot wheels ramps at home… The exhibit closes on January 23, so don’t dawdle if you want to check it out. 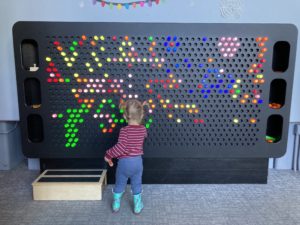 We passed through their “Boost” section, which is themed around wellness and the body. There were fun activities about nutrition, a cool station where you can program a band of instruments (my personal favorite), and a ton of other stuff. From there we went to the kid’s area, which I think was the kids’ favorite. It has a big climbing area and a giant lite brite with scattered books, activities, and educational toys. The kids had a blast running around in there, and I enjoyed the opportunity to sit down for a bit. 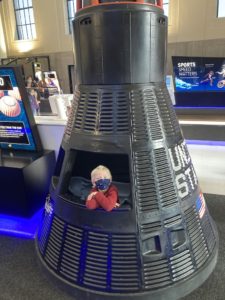 Another favorite, and our last stop of the day, is the “Speed” area. It’s all about things both fast and slow, ranging from whizzing photons to continental shifts. There’s a racing area where you can test your speed against a cheetah, a T-Rex, or Usain Bolt. This one is Benny’s favorite. He insists that I run with him again and again, regardless of how many people are waiting in line. They’ve got info about relativity, erosion, animal speeds, and the speed of sound. The whole space is shadowed by a full-scale replica of an SR-71 Blackbird.

Overall it was definitely worth the trip! It’s not too far from Fredericksburg, and you get a lot of bang for your buck. It’s right in Richmond, too, so there are lots of options around for getting dinner afterward. We went to a brewery nearby for beers and burgers. There’s no cafe in the museum itself, only some vending machines and tables, so I suggest bringing your own lunch. Make sure you bring your mask—they’re required as of the time of writing.

As Grymes Memorial School prepares to celebrate its 75th anniversary in 2022, it is certain the past two years will be an important chapter...
Read more
Sponsored Content