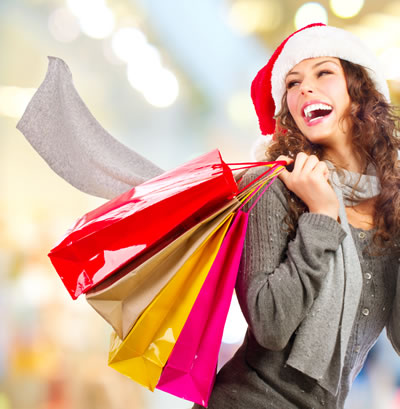 Just as the leaves are turning from green to gold, your thoughts are turning to holiday shopping… and how much gold it will take! If you’re like me, you’ve already started an informal inventory of who is on your Christmas list this year and what you’d like to purchase them. And if you’re scoffing right now and thinking, “Are you crazy? I’m still trying to pin down my child on a Halloween costume, never mind Christmas!” then perhaps you should start thinking about it.

According to a new survey commissioned by TransUnion, more than half (64.4 percent) of Americans go into the holiday shopping season without saving for it ahead of time. Not only does that not bode well for your bank account, but you could be starting 2014 with major debt which could harm your credit score if you don’t pay it off, or on time.

A few years ago, I took the time to write down every single person I was going to buy a gift for over the holidays (or make a gift for), and then as ideas struck me, I would write down what I wanted to give them next to their names. Last year, I took it a step further, writing down their names and then the amount I could afford to spend on each person. Then I tried to find a gift that fit within the allotted amount. This gave me a much better handle on the amount of money I was spending for Christmas each year, and how much I need to save for the following year.

“Consumers should plan ahead now by making a list of those they plan to purchase gifts for, determining the total they will need to save between now and the holiday season; and setting apportion aside out of each paycheck, ” said Julie Springer, vice president at TransUnion. “That way, when the holidays arrive, consumers can use their saved money, enjoy a more relaxed holiday season – and enter 2014 without the burden of unmanageable credit card debt.”

After you’ve written your list and determined the amount you can spend on each person, tally it up. Now, don’t panic! I know it’s overwhelming at first. It may even be the first time you’ve ever really sat down and dissected this information. I understand. Now, here’s a critical next step: determine how many paychecks you will receive between now and Christmas. Divide that number by the total amount you wish to spend and set aside that much from each paycheck. Breaking it down into smaller amounts will help you determine whether or not you have overstepped your spending boundaries, or if you’re right where you should be.

I know the stores want you to believe they have amazing deals on Black Friday and post-Thanksgiving in general. I know. But I have to say from experience that I not only spend less money by shopping sooner, I tend to buy only the items I need rather than the gimmicky thing I don’t. I have yet to see that truly amazing, one-of-a-kind gift on a “holiday special” that was less than the amount I paid for it in October.

Not only will you be less stressed once the holidays actually arrive, but starting your shopping now means having more time later to do the things you want to do for the holidays (like baking cookies with your kids after work). You won’t have to fight the crowds, slosh through the snow, or wait in those ridiculously long lines.
And the best part of all? Now that you’re used to setting aside a certain amount each month for Christmas, keep it going in 2014 and you’ll soon have a hefty savings account for those unexpected financial crises.

Kimberly Carlson is a freelance writer, editor, blogger, and single mom of two, who admits to giving homemade gifts for Christmas when times are tough. She abhors shopping and still loves receiving hugs on Christmas morning the most.