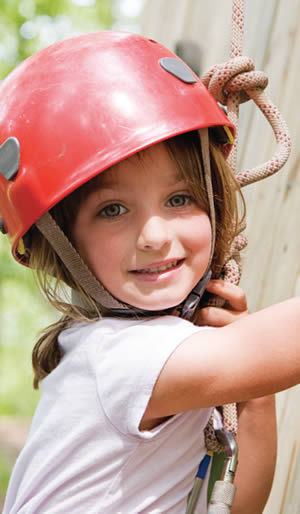 Where did the school year go? I was just walking my daughter, Jessie, into her second-grade classroom for her first day of school. Of course, I had my camera and camcorder. I’m always carrying one or the other, or both, to capture memories of her firsts. She probably won’t like it when I’m snapping pictures of her first date, but come to think of it, I probably won’t either. My wife, Mattie, might need to snap that one. For now I’m just looking ahead to summer.

Somehow the school year zoomed by and its time to register for summer camp. Jessie’s summers have been enriched by all kinds of camps over her early years. Of course, these have not been the kind of camps where older children go to spend a week or more away from their parents. Mattie and I couldn’t handle that yet. Instead, they are three-hour sessions over four or five consecutive days during the summer. There’s been Kindermusik Camp, Kindergarten Camp, Cheer Camp for Girls, Fancy Nancy Camp, Reading Adventure Camp, Math Camp, Math and Science Camp, Soccer Camp, and Basketball Camp. Wow, I wish I would have been able to plug into these camps as a boy. Okay, not Cheer Camp for Girls or Fancy Nancy Camp. Her summers also include Vacation Bible School and a trip to visit our out-of-state family and friends.

Not only do we have lots of pictures and video footage to capture this summer fun, we also have a box or two of the creations that Jessie makes during these experiences. Whereas Mattie finds it difficult to clean out Jessie’s closet and get rid of the cute clothes that she’s outgrown, I have trouble throwing away my daughter’s handiwork. One day when Jessie is older or we are out of storage room, we will look through the boxes of her masterful artwork and remember the fun times she had making them.

Although Jessie loves to attend camps with her friends, I hold fond memories of summer camps held right here at home. Water Camp involved squirt gun battles and watching Jessie run through the sprinklers in her bathing suit. Hey, the lawn needs watered and the girl needs a bath, so why not multi-task? It’s amazing, too, how one little girl can get so drenched while helping her dad wash the family vehicles. I’ve learned that there are major advantages to maintaining control of the hose, but sometimes she takes over and I end up soaked, instead of just mildly saturated. 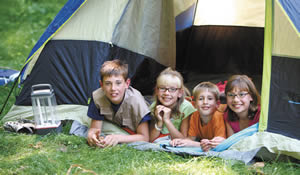 I’ve found that Picnic Camp can be held in a variety of settings as long as snacks are involved. We’ve held picnic camps on the garage floor, in the back of the family van with all the seats and windows down, and in the bed of our pickup truck. A few coloring books, a box of crayons, paper, a few good books, and the CD player provide lots of entertainment.

We’ve also had numerous Learning Camps inside Jessie’s tent set. This is not always the easiest setting for a 6’5″ man to squeeze into, but I wouldn’t miss it. It’s amazing how much more fun math and writing are in a tent instead of at the table. I’ve found that the blood always flows back into my legs within a few minutes of the camp’s conclusion. Unfortunately, I haven’t been able to convince Jessie that Nap Camp would be awesome.

I’m not even going to tell our new puppy, Sadie, all the fun that’s in store for her this summer. I know that Dress-up Camp (for dogs) is already scheduled. As Sadie has previously modeled in several fashion shows and posed in all sorts of buckets, boxes, and bags, it seems kinder not to let her know what she’s in for. Sadie will probably be glad when Jessie goes to some of her other camps.

In a blink of an eye, summer will be over and I’ll be holding Jessie’s hand as I walk my third grader to her classroom. Of course, I’ll be toting my camera and camcorder, ready to capture the memories of another first day of school. And who knows, when I get home after dropping Jessie off, I might just attend Nap Camp. I have a sneaking suspicion that Sadie will join me.

Whether your summer plans involve organized camps or make-shift ones, here’s wishing you and your family a summer filled with fun, learning, lots of creative projects, and some healthy snacks. What a great way to cherish the summer moments.

Patrick L. Hempfing is a former banker, accountant and auditor. He now is a stay-at-home dad and writer. patrickhempfing.wordpress.com