Celebrate Freedom: Visit & Celebrate Independence Day in One of These Four Historic Towns

Independence Day is not just a day full of parades, games and fireworks commemorating our nation’s birth. It is a day that seems to bring people together. And for Fredericksburg native, Amie Cartwright, the Heritage Festival in Downtown Fredericksburg seems to do just that.

“I love how the community comes together to celebrate, and there is so much to see and do,” said the mom of two. “I love how patriotic and kind everyone is…I can’t wait to go back this year.”

As neighborhoods and communities gather to celebrate the nation’s birthday, take the opportunity to discover American history first-hand. From the plantation home of George Washington to the sites of Civil War battlefields, Virginia is rich with history. And with Independence Day fast approaching, be sure to catch a glimpse of that past while you celebrate at one of these four historic towns. 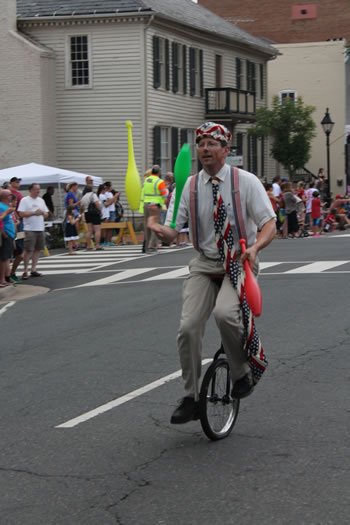 Check out the Heritage Festival in Downtown Fredericksburg where families can enjoy a craft show, a classic car display, face painting, a moon bounce and live music as well as a fireworks display at John Lee Pratt Memorial Park just after dusk. Hop on the trolley in downtown or at the Eagles Lodge on Cool Spring Road to Ferry Farm, George Washington’s boyhood home, where children can discover more about the nation’s first president through music, games, crafts, re-enactors and archeology.

Nestled at the base of the Blue Ridge Mountains, Charlottesville is home to two of the nation’s founding fathers, Presidents Thomas Jefferson and James Monroe. Wander through Jefferson’s home, Monticello, where you can discover the life and legacy of its owner, or stop by Monroe’s estate at Ash Lawn-Highland to uncover more of America’s heritage. Explore the town’s historic past through signs and monuments scattered throughout the city commemorating some of its historical figures and events.

Celebrate the nation’s 241st birthday at Patriotism in the Park in McIntire Park with games, face painting, live music and food as well as a fireworks display after sunset. Witness men and women become citizens at the 55th annual Independence Day Celebration and Naturalization Ceremony at Jefferson’s Monticello, or head over to James Monroe’s Highland to enjoy historic games and activities, food and live performances from the Heifetz International Music Institute.

Located along the banks of the Potomac River just outside of Alexandria, Mount Vernon is home to George Washington’s plantation house. Families can explore the 21-room mansion and its grounds, including Washington’s four-acre farm, Pioneer Farms, as well as several outbuildings such as the Servants Quarters, the Coach House and even the old family tomb. Visit the Donald W. Reynolds Museum and Education Center before you leave to learn more about Washington’s life story through hands-on activities and interactive exhibits and displays. 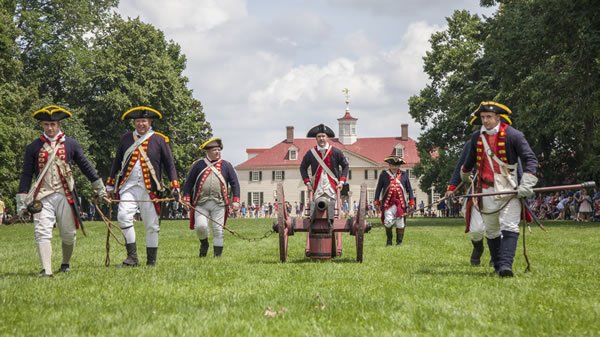 Relive American history with special military re-enactments and a daylight fireworks display at Mount Vernon’s An American Celebration this Fourth of July. Witness over 100 people become citizens during the celebration’s naturalization ceremony where you and your children can also enjoy free birthday cake and a visit from President Washington and his wife.

Once the capital of the Virginia colony, Williamsburg is a part of the “historic triangle” with Jamestown and Yorktown just a short drive away. Transport back in time at Colonial Williamsburg, a historic museum community, where colonial times come to life through re-enactors, historic buildings and props. Also, visit the Jamestown Settlement on the banks of the James River for a chance to see replicas of the three ships that sailed to Virginia in 1607 and more. Just a short drive outside of town, Yorktown Victory Center can help families delve deeper into the American Revolution and the birth of the nation through films, displays and live history exhibits. 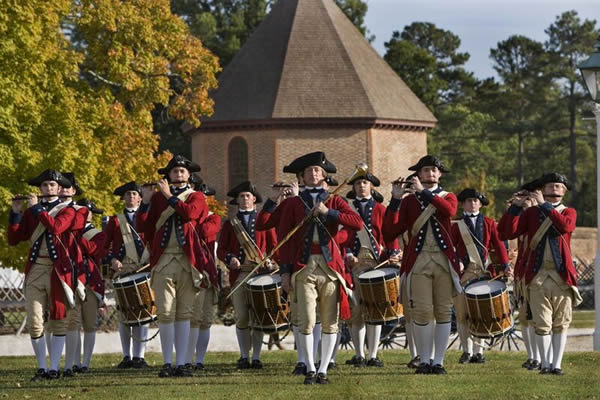 Fife and Drums at Colonial Williamsburg

Celebrate Independence Day at Colonial Williamsburg where you can witness a militia muster and salute the original 13 states during a special ceremony as cannons and muskets fire in the background. Take in the fireworks display from either Market Square or Palace Green after dark. Head over to Yorktown Victory Center’s Liberty Celebration to catch a glimpse of special military exercises and tactical drills and then watch the fireworks display over the York River.