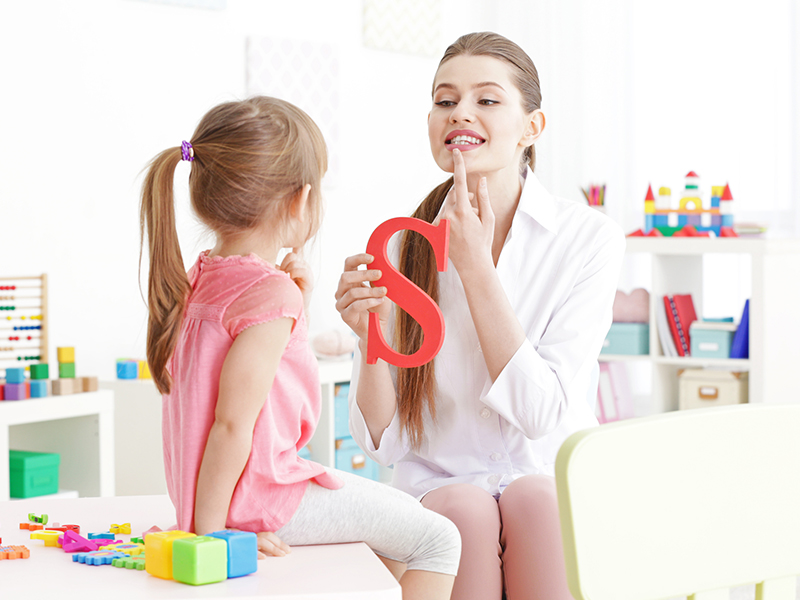 Parents of young children often can’t wait to hear their children’s first words and be able to better communicate with them. Sometimes, though, it may take longer for a child’s speech to develop. So, when should parents be concerned and consider speech therapy?

Lindsay Dickinson, a speech and language pathologist, is owner of Therapy Toolbox, an organization that provides speech and language screenings, evaluations and therapy. Therapy Toolbox works with children on a variety of speech issues including speech sound production; speech intelligibility (the ability to be understood in conversation); language use and understanding; fluency and stuttering; and overall communication goals. According to Dickinson, there is a lot involved with speech development.

“There are numerous milestones we consider as speech and language pathologists, including sound development, speech intelligibility and language understanding and use,” Dickinson says. “For sound development, there are certain ages in which sounds should be mastered. For example, children should have the K and G sounds mastered by age 4. However, there are other sounds that are not expected to be mastered until ages 7 or 8, such as the R and TH sounds.”

The ability to understand your child when they speak is also important to consider.

By age 2 ½ , children should know 50 words or more, and should be consistently using three-word utterances or more per statement by the age of 3.

“It is our hope that by the ages of 3 to 4, children are using longer sentences of at least three to four words that include nouns, verbs and some adjectives for details in their language,” Dickinson says. “Parents should listen to their gut. If something seems different or not quite right, it doesn’t hurt to follow up with a pediatrician or a speech-language pathologist.”

Therapy Toolbox offers complimentary speech and language screenings. The sooner a child is screened, the better, as problems with speech can lead to other issues as a child grows older.

“Proper speech and language development are crucial for so many reasons,” Dickson says. “For infants and toddlers, it helps to decrease frustration and helps children recognize the importance of being able to communicate with others and make friends. It also allows for skills to grow as expected in preparation for school. As children learn to read and write, if their sound or phonics system is incorrect, their reading and writing skills are often incorrect as children often write how they speak.”

Moms and dads can help at home by talking to their kids during playtime, reading to them, singing to them or asking them questions about what they see during a drive or at the grocery store.

“We are constantly communicating in our world, so if a piece of the puzzle is missing or off, it can make interacting with others more difficult, leading to possible academic difficulties, social difficulties and frustrations for both the speaker and the listener,” Dickinson says. “Early intervention and speech and language therapy can help across all of these aspects, improving relationships and interactions for everyone across all stages of life.”