When My Kid Says “I Hate You,” I Let Her 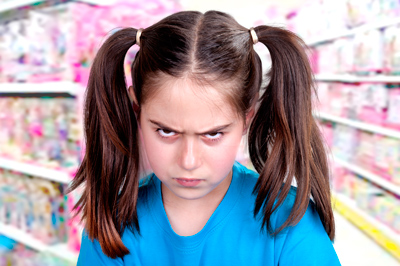 According to Neuroscience That Doesn’t Make Me a Pushover

My kids, especially my five-year-old, utter “the H-word” more often than I’d like. When I hear it, my chest tightens, my jaw clenches and I have to force myself to take deep breaths.

If I know one thing as a parent, it’s telling kids they aren’t allowed to use a certain word is an excellent way to ensure they use it as much as possible. Research shows kids are 11 million times more likely to do the thing they’ve been expressly told not to do. And by research, I mean my own informal studies performed totally unscientifically using my own children as subjects.

But the main reason I haven’t banned the H-word is I want my kids to be free to express themselves, whether it’s about a vest they’d rather not wear or the kind of mother they wish I was. When they act like little dictators, they’re not trying to drive me crazy. They’re trying to tell me something.

Says Kate Orson, Hand in Hand parenting instructor and author of Tears Heal: How to Listen to Our Children, “When a child says ‘I hate you!’ it’s like they are waving a red flag saying, ‘Help! I’m not thinking well! I need connection with you and some help with my feelings.’”

The power of listening as a means of fostering connection is stronger than many of us realize. But listening takes time and patience, after all. And who wants to listen to a kid’s angry outburst? Many of us have been told the best way to extinguish our children’s undesirable behavior is to ignore it. But in Listen: Five Simple Tools to Meet Your Everyday Parenting Challenges, authors Patty Wipfler and Tosha Schore, M.A., use neurobiology to flip that notion on its head. They explain that in order for kids to engage their prefrontal cortex, which allows them to think well, they need to feel connected to an adult or caregiver.

How does connection influence thinking?

Just below the prefrontal cortex lies the limbic system, the brain’s social-emotional center.

The limbic system is responsible for interpreting body language, tone of voice and all kinds of other cues that determine whether we feel safe and connected with the people around us, anxious and afraid, or anywhere in between.

According to Wipfler and Schore:

When your child feels connected and protected, her limbic system can do an important job: It can coordinate communication between all parts of her brain. It opens access to her prefrontal cortex, so the reasoning center of her brain can hum. Connection “turns on the lights upstairs.”… Through no fault of your own or anyone else’s your connection with your child will break often. When she feels threatened, frustrated, or when another feeling floods her system, she loses her sense of connection. Shazam! Her prefrontal cortex shuts down. She literally can’t.

So when my kid yells “I hate you!” she’s already feeling disconnected from me. In my experience, disciplining, yelling at or ignoring her only escalates her behavior. This is consistent with Wipfler and Schore’s work, which suggests that my negative reaction causes further disruption of our connection, which results in her impaired ability to engage her prefrontal cortex (i.e., her ability to “behave”).

I’m not saying my daughter’s occasional hateful outbursts don’t hurt my feelings. On good days, they sting. On bad days, they make me wonder if I’ve ever done anything right as a parent while I hide in the bathroom with the shower turned on to muffle the sound of my sobs. But understanding the vital role of connection in brain function makes it easier to step back, take a breath, and listen to the feelings underneath the ugly words.

Orson permits her daughter to say “I hate you” as much as she wants, but that doesn’t mean Orson ignores it. On the contrary, she sees the words as a demonstration of her child’s “disconnected state and upset feelings.”
She described a recent interaction between herself and her daughter. Upon Orson’s return from a three-day trip, her daughter said, “I don’t like you.” She says, “I knew this was because [my daughter] had some feelings about me being away and that I needed to reconnect with her, so I moved in close, gave her a hug, and she started giggling. Laughter is one of the ways children naturally release stress and tension and get better connected with us, so if your child says they hate something you might want to turn it around playfully.”

When a child says “I hate you!” it’s like they are waving a red flag saying, “Help! I’m not thinking well! I need connection with you and some help with my feelings.”

For parents struggling to find an appropriate response to “I hate you,” Orson recommends trying humor. “You could say, playfully, ‘What!? That can’t be right. You must have been eating that word muddle soup that turns your words around and you say the opposite. I’m sure you love me really.’ And see if that elicits some laughter.”

Humor is not always the best medicine, however. Orson cautions it’s important to read your child and the situation. “Sometimes if children are really angry, then being playful around it can make them feel more angry [sic], in which case you have to be the best judge of what’s going to work well in the moment.” Another alternative to the playful approach would be to move physically closer and make eye contact. At that point, they might actually start crying, “as they sense your connection and can let go the feelings behind the anger.” In this case, not only have you resolved the issue at hand but according to Orson, this kind of tirade is less likely in the future “because your child has let go of the feelings behind it.”

I’m not saying I encourage my kids to act like brats. For example, I wouldn’t allow them to say they hate the dinner Grandma is serving or to tell a friend they hate her.

In this type of situation, Orson recommends gently setting a limit, which looks very different than whisper-yelling at your child “We don’t talk like that!” or threatening to take away her favorite doll. (In my experience these “strategies” are rarely effective anyway). Orson recommends moving in closer to your child, crouching down to their level, making eye contact and kindly—without shame or blame—saying, “I’m sorry, I can’t let you say that,” and explaining that it hurts the other person’s feelings.

Hate is a strong word and an even stronger emotion. I’m not saying I like to hear the word in my house, but I tolerate it because I want my kids to know their negative emotions are just as valid as their positive emotions. I want them to grow up knowing that whatever they have to say, I am listening.