From Father to Son, Boy to Man 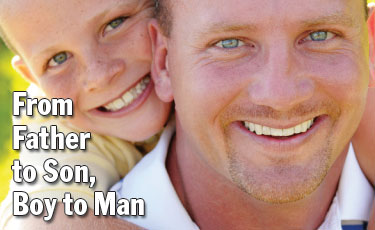 The unique relationship between father and son can brings a lot of joy, along with a lot of responsibility-

My husband and 12-year-old son come tumbling in the door. David, his face covered in chocolate from the donut he has just eaten, exclaims, “You wouldn’t believe what we saw, Mom, a fighter jet! It flew right over Dad and me while we were fishing!” My husband walks in, a dab of jelly at the corner of his mouth from the donut he has just consumed, “That’s right Mom, it was pretty cool, wasn’t it buddy?” I try to be impressed, but I just don’t get it. Just as I don’t understand their unbridled passion for fishing lures, remote control helicopters, and anything that goes “boom”. They laugh over bawdy jokes involving bodily sounds, they build a fire at the campground just because it’s fun to do, not because we need it, they eat summer sausage sliced with their pocket knives and watch the latest survival video. It’s indeed a private world these men inhabit, one that David’s sister and I can only look at from the outside and shake our heads and wonder.

What I really wonder is, what is this father teaching his son? It turns out he is teaching him plenty. Says Michael Gurian, author of The Wonder of Boys: What Parents, Mentors and Educators Can Do to Shape Boys into Exceptional Men (Putnam, 1996): “… a father raises his son in the father’s shadow, a shadow both dark and beautiful, in which the son will learn essential lessons about how to live, first as a boy, then as a man. Whether he is teaching a son commandments for living, or why fences must be built, or what it means to have a sacred mission, the father blesses the son with a man’s power to shape both his inner and outer world as a male.”

So, dads, it seems that if you want to raise these boys into fine young men, you’ve got some work and responsibilities ahead (in addition to all the fun you guys are having). And it’s important for us moms to get out of the way while the dads are doing their work. We’ve put together a list of 10 essential ways a father can nurture his son. This list was culled from the work of Michael Gurian and the research of Dr. Ken Canfield, founder of the “National Center for Fathering” (www.fathers.com), whose mission is to “improve the well-being of children by inspiring and equipping men to be more effectively involved in the lives of children.” So in honor of Father’s Day, we offer you this:

10 Essential Ways a Father Can Nurture his Son:

1. Be intentional. Make a list of the skills, attitudes, and values you hope to instill in your son by the time he leaves home. Examples might include financial stewardship, the ability to delay gratification, prayer, basic auto maintenance, thankfulness, perseverance, honesty, a work ethic, modesty, or family togetherness.

2. Be a model for healthy expression of emotions. Dads need to help their sons regulate and express their emotions in a responsible way. Start by getting comfortable with showing your own emotions (this may take some work!) Then be a positive role model for expressing emotions, and for regulating anger.

3. Model and monitor respect. Many young men have lost a sense of respect, and it especially shows in their speech. We hear them trash talking, swearing, or denigrating women. Dads need to monitor the way their sons are talking, and teach them to use their speech for positive ends-like articulating thoughts and feelings, building relationships, giving encouragement and speaking words of life and peace. Dads also need to be a model and monitor for respecting authority.

4. Show love and affection. Boys with affectionate fathers develop positive self-esteem, they tend to thrive in schoolwork, and have fewer gender identity issues. So go ahead and give your son a big, old-fashioned bear hug-and do it often. Verbal affection is important as well.

5. Model a spiritual life. By your example, your son will gain an appreciation for prayer and other acts of devotion.

7. Seek equal partnerships with women and female culture. Let your respect for your wife, daughters, and all other women be apparent in all you say and do.

8. Seek a male kinship system. Become part of a male community in which you support and are supported in your quest to be a better husband and father.

9. Be an agent of service. Share real-life experiences of service with your son. These could be as simple as daily acts of kindness to more structured projects such as volunteering once a month at a homeless shelter.

10. Observe rites of passage. As your son meets the benchmarks along the way that help signal new levels of maturity and responsibility, make sure you celebrate. Let him know what he has accomplished towards becoming a man.

Happy Father’s Day to all you wonderful dads out there. We appreciate all you do to help our sons grow into fine young men.