Be a Lock and Talk family. Save lives.

The Rappahannock Area Community Services Board offers a message of hope that we can save lives in our community.

Be a Lock and Talk family. Save lives.

High-profile suicides like those of Anthony Bourdain and Kate Spade put this topic front and center in the media. Statistics from the American Foundation for Suicide Prevention tell us that for every suicide, there are 25 attempts.
That makes it critical that families and communities have the tools to talk about mental health, the knowledge to spot the warning signs of suicide and the confidence to take actions—like securing lethal means and speaking up for those at risk—that can save lives. 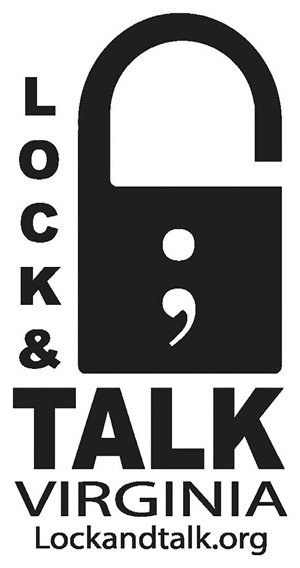 The Lock and Talk Virginia program was created to do just that.

Lock and Talk aims to prevent suicides by:

Learn how you can play a role in saving lives by adopting the Lock and Talk strategy.

The “lock” part of the program goes directly after the leading lethal means used in death by suicide year after year: firearms (used in five out of 10 suicides in the U.S., and nearly 60 percent of suicides in Virginia) and drugs and poisons.

Michelle Wagaman, Prevention Services Coordinator for the Rappahannock Area Community Services Board, said Lock and Talk Virginia is building a network of families, community organizations, pawn shops, gun retailers, law enforcement agencies and other groups that can become a safety net to try to prevent suicides in Virginia. A big part of that strategy is removing lethal means from those at risk.

“If we can put distance between an individual in crisis and the lethal means, we can prevent suicide,” Wagaman said.

Healthy communities must have an open conversation about suicide, the risk factors, how to spot them and act on them.

Just as traditional first aid training teaches people how to save lives through physical means like tourniquets and CPR, Mental Health First Aid equips people with the tools and knowledge to help during a mental health crisis.

Through both youth and adult curriculums, the class teaches about common risk factors and warning signs of mental illnesses such as anxiety, depression, substance use disorder, bipolar disorder and schizophrenia.

“We want this to become as common as CPR training,” said Wagaman. So far, 1,500 people in the community have been trained. In addition to interested community members, the training is given to all graduates of the Rappahannock Regional Criminal Justice Academy, and has also been offered in several schools divisions, and to resident advisors at the University of Mary Washington.

YOU CAN PLAY A ROLE

Families don’t need special training to use the principles of Lock and Talk to help build a community safety net that can prevent suicides in the Fredericksburg region.

Visit websites like lockandtalkvirginia.org to learn how to lock lethal means in your home.

Promote awareness and open discussion about mental health in your house with the following:

Suicide Prevention: A message of hope

Suicide does not discriminate. People of all genders, ages and ethnicities can be at risk.
Knowing the facts can help us all play a role in creating a healthier community.

Myth: “People who talk about suicide won’t really do it.
Truth: Do not ignore any suicide threats. Almost everyone who attempts or completes suicide has shown warning signs through words or behaviors.

Myth: “If a person is determined to kill him/herself, nothing is going to stop him/her.”
Truth: Most suicidal people do not want to die; they want to stop the pain. The impulse to end their life does not last forever.

Myth: “Talking about suicide will put the idea in a person’s head.”
Truth: You do not give the person ideas about suicide by talking about it. For those at risk, the idea is already there. Providing the opportunity to discuss feelings openly and safely is one of the most helpful things you can do.

Make the call. Save a life.

In an emergency, call local law enforcement at 911 and ask for a Crisis Intervention Trained officer.

Contact the Crisis Text Line by texting HOME to 741741 or www.crisistextline.org.