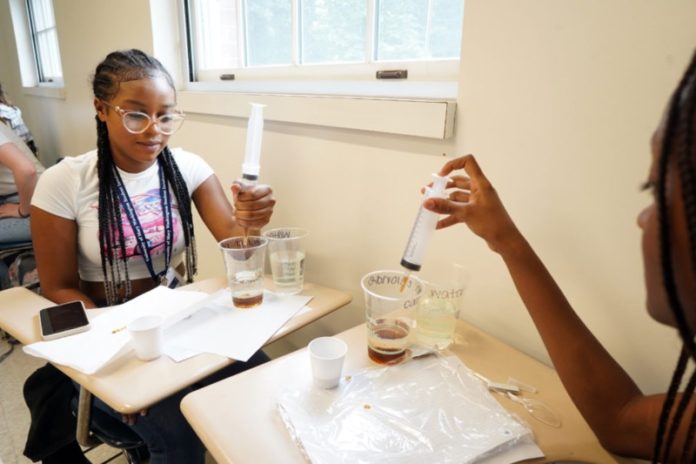 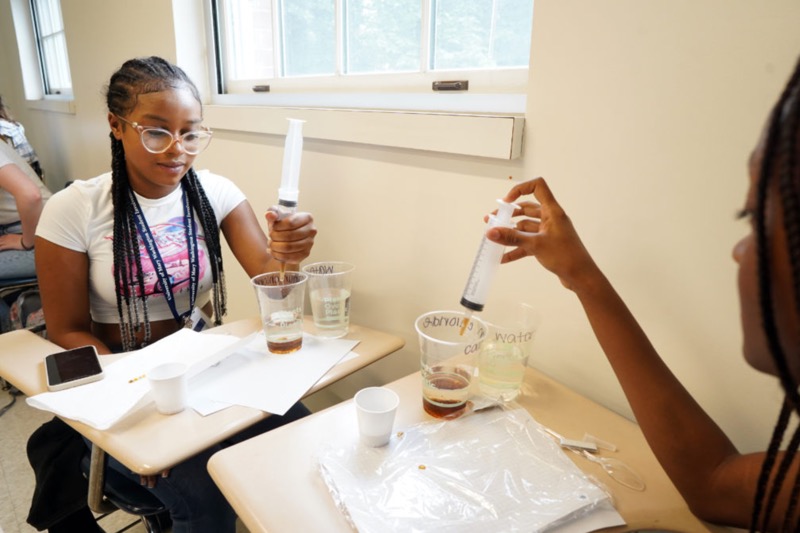 July 27, 2022—Holding tight to a video camera aimed at his face, high school junior Simon Young became a blur of motion earlier this month, whirling on a whimsical stool in the University of Mary Washington’s Hurley Convergence Center. The experience and its result—a panoramic portrayal of Simon’s dizzying ride on the curious chair—was part of a lesson in virtual and augmented reality.

Billed as an exploration of science fact rather than science fiction, the class was one of several – from kitchen chemistry to computational physics—available to rising 10th- through 12th-graders who took part in UMW’s weeklong Summer Enrichment Program (SEP). Packed with immersive instruction and high-impact activities, the unique residential program creates a microcosm of college, giving teens a taste of how it feels to live and learn on campus.

“I wanted a snapshot of college life,” said Zack Roland, a senior at Stafford’s Mountain View High School. “It’s the opportunity of a lifetime.”

More than 70 teens from across Virginia, plus Maryland, Ohio and New York, signed up for the chance to sample life as Mary Washington students. Many are set to become the first in their families to attend college, said Senior Lecturer of Biological Sciences Michael Stebar, who found himself in that same situation when he finished high school.

Zack Roland, a rising senior at Mountain View High School, and Stephanie Greaver, a rising senior at Spotsylvania High School, participate in ‘Kitchen Chemistry: The Science Behind the Food We Eat.’ Samantha Bass (left), a sophomore at King George High School, and Kennedy Roberts of Haymarket, Virginia, practice using chemistry to make bobas, the signature ingredient in the popular Bubble Tea. Photo by Suzanne Carr Rossi. Students in the Summer Enrichment Program’s Kitchen Chemistry course use syringes, chemical test strips, calcium chloride and Coke to make bobas. Photo by Suzanne Carr Rossi.
“I would have benefited from the experiences a program like this provides,” said Stebar, who co-directs SEP with Associate Professor of Communication and Digital Studies Elizabeth Johnson-Young. “How do you interact with professors? What’s it like having a roommate?”

Two to a room, campers moved into recently renovated Willard Hall, to settle in for their compact college stay. They ate in the University Center dining hall, trekked across campus and took field trips to George Washington’s Ferry Farm and Alum Spring Park. “It was exciting to see them engage throughout the University and Fredericksburg while forming close friendships,” Johnson-Young said.

The students chose from an array of courses loaded with hands-on exercises and lessons in technology. More leisurely late-day activities – a geocaching-type scavenger hunt, a tour of UMW’s art galleries, yoga and hip-hop classes, and tutorials on headline writing and happiness journaling – fostered connections among campers.

Justin Holden (left), a rising junior at Riverbend High School, and Calvin Rodriguez of Washington State participate in ‘The Realities of Virtual Reality and Augmented Reality’ course. Students used avatars to depict the ways in which they might represent themselves in varying environments. Photo by Suzanne Carr Rossi. Wilson Memorial High School student Abby Ray Wilson uses an app to bring a colored picture to life. The activity was part of a lesson on augmented and virtual reality. Photo by Suzanne Carr Rossi. Students created their own holograms during ‘The Realities of Virtual Reality and Augmented Reality,’ taught by Assistant Professor of Communication and Digital Studies Brenta Blevins. Photo by Suzanne Carr Rossi.
UMW student Megan Childs, who served as one of several Summer Enrichment Program counselors, watches while a camper participates in a session about virtual and augmented reality. Photo by Suzanne Carr Rossi. Xander Kent, a rising senior at Riverbend High School, twirls in a red spinny chair while capturing the action on a 360 camera. The footage was used to explore the dynamics of augmented and virtual reality. Photo by Suzanne Carr Rossi.
A special SEP sub-program, UMW’s Teachers for Tomorrow Summer Institute hosted by the College of Education, attracted high-schoolers who want to be educators, like Kennedy Roberts of Haymarket, Virginia. Based on Virginia’s initiative to draw students into teaching careers, this year’s curriculum focused on engaging diverse learners.

“The future is now,” said Assistant Professor of Communication and Digital Studies Brenta Blevins, who led the virtual and augmented reality session. “Our SEP folks are going to be the ones creating that future.” 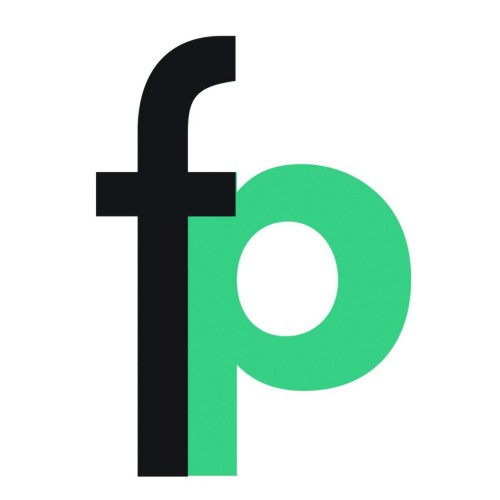