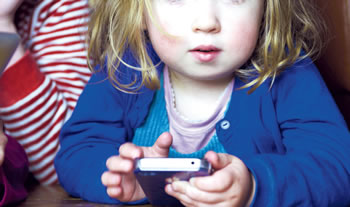 You see them at the mall, the beach and at restaurants. Heads bent to their laps, brow furrowed in concentration with fingers swiping and thumbs tapping. Are these busy employees keeping up with work even when away from the office or teenagers more interested in their screens than the friends next to them?

What you are seeing more often now are toddlers; tots whose screen time is no longer confined to the house or even the car’s DVD player. Toddlers who aren’t engaged with the world around them as they should be because they are staring at the small screens a few inches from their faces.

Worse yet, many times the tiny individual playing with mommy’s smartphone is under 2. Why is this worse? According to the American Academy of Pediatrics (AAP), “Television and other entertainment media should be avoided for infants and children under age 2. A child’s brain develops rapidly during these first years, and young children learn best by interacting with people, not screens.” Put more plainly, since 1999 the AAP has recommended that, “Pediatricians should urge parents to avoid television viewing for children under the age of 2 years.”

Some of the reasons that this group recommends avoiding screen time for the under-2 set include:

• They lack the cognitive ability to process the information being shared
• Media, specifically television, has been demonstrated to interfere with the quality and quantity of a young child’s sleep
• Related to this, insufficient sleep can have negative effects on mood, behavior and learning

The National Association for the Education of Young Children (NAYEC) also has recommendations for limiting and supervising babies and toddlers’ use of technology. In their position statement on Technology and Interactive Media as Tools in Early Childhood Programs Serving Children from Birth through Age 8 they say, “If technology is used, it must be in the context of conversation and interactions with an adult.”

This can be challenging for caregivers because many times they cannot interact with their child during screen time, but need an “electronic babysitter” so they accomplish tasks: cook dinner or return a phone call without interruption. But experts say that planting the child in front of any screen alone is exactly what we should not be doing.

What’s a harried parent to do if they need to keep their toddler occupied for 15 minutes? NAYEC, while never recommending screen time for children under 2, does acknowledge “there are some educationally valuable television shows, websites and other digital media.” If truly necessary it would seem that the best advice would be to choose the most age-appropriate and high-quality programs and use it as little as possible for babies and toddlers.

There is a bit more latitude with children 2 and up, as they can understand and benefit from some media, especially if it is educational and/or interactive. A multitude of experts, including those already mentioned, as well as the White House Task Force on Childhood Obesity and the Let’s Move! Child Care initiative, stand firm on the necessity of limiting (1-2 hours per day maximum) screen time for children older than 2.

Our children are growing up in a digital age. NAEYC acknowledges this, stating, “When used wisely, technology and media can support learning and relationships.” The key for parents and caregivers is to use screens wisely, and not let them replace or supplant the relationships your child needs to build with the people and the world around him or her.

Mary Becelia lives with her family in southern Stafford County.