Fighting Your Children’s Colds and Flu 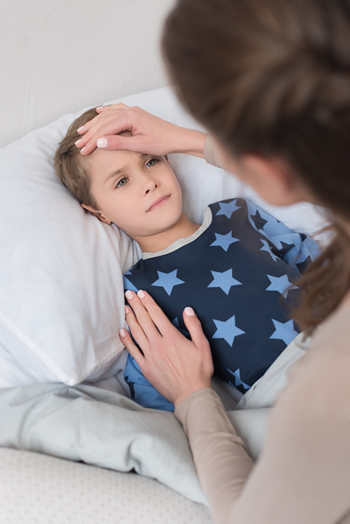 ‘Tis the season for germs and the spread of viruses that cause the common cold and flu. So what can families do to keep illnesses away during the winter?

“Sometimes we get coughed or sneezed upon and contract a cold virus that way,” says Dr. Richard G. Erwin, a pediatrician with Mary Washington Medical Group Pediatrics. “Other times, we pick it up from touching everyday objects like keyboards or eating utensils that viruses can live on, and then the virus enters our system after we touch our mouths or noses.”

The best prevention is, of course, frequent handwashing, as well as keeping your hands away from your face. Erwin also advises not to share any food or drink with others, and always sneeze into a tissue or the crux of your arm instead of the open air.

Children are likely to become sick quicker with the flu, which may also be accompanied by a fever and body aches. Colds can come on anytime of the year, while influenza strikes during the winter.

Keeping a cool-mist humidifier running can help alleviate some cold symptoms. Nasal congestion can become a big issue for infants who are fighting a cold.

“The best thing to do is to use nasal saline drops with suction,” says Erwin. “The salt helps draw out the mucus.”

Over-the-counter medications such as Tylenol or Ibuprofen may also provide comfort.

“Keep in mind that the fever itself isn’t harmful,” Erwin notes. “In fact, it is beneficial and means the body is fighting the infection.”

The American Academy of Pediatrics does not recommend using over-the-counter cough and cold medicines for infants and children younger than 2 years old due to a risk of life-threatening side effects.

“Several studies have also shown that cough and cold products don’t work in children younger than 6 years old and can have potentially serious side effects,” Erwin adds.

Natural medications like Zarbee’s and Hyland’s may help a child’s cough, or even honey, which is a natural cough suppressant. Remember not to give honey to a baby less than 1 year old, as this may cause botulism.

Resting and letting the cold ride itself out is the best option. As your child recovers, watch for signs of respiratory distress and troubles with breathing, dehydration, or lethargy.

“If any of these were to occur, you should have your child evaluated by a medical provider immediately,” Erwin says.