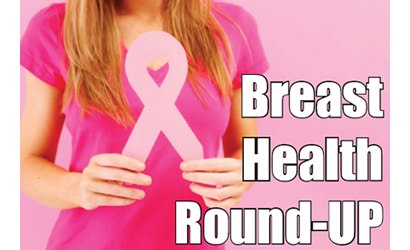 October is Breast Cancer Awareness Month – a great time to share the latest news about mammography, advanced breast screening and new research on increasing breast-cancer survival rates. We’ve also include tips for today’s teen girls to help decrease their future breast-cancer risk. Check it out. And remember to ask your doctor for a breast-self-exam instruction card to hang in the shower. It’s a great monthly reminder to take care of your health!

Fear of discomfort is one reason some women may choose not to have their recommended annual mammogram. Yet, there are a few simple things a woman can do to ease any possible discomfort she may feel during this important test, according to experts at Baylor Regional Medical Center in Plano, Texas:

° Hold off on caffeine. Caffeine has a tendency to make a woman’s breasts tender and lumpy, potentially making the mammogram uncomfortable. Avoid drinking coffee and tea, unless it’s decaffeinated, for a week prior to a mammogram. Other items containing caffeine include diet drinks, chocolate and even some common over-the-counter (OTC) pain relievers. Be sure to read the label of any OTC medications before you take them prior to a scheduled mammogram.

° Steer clear of perfumes, talcum powder, etc. Deodorant, talcum powder, perfumes and oils may leave a residue that can be picked up by the X-rays, obscuring the mammogram and possibly interfering with the results. Ultimately, this means a woman could need a second mammogram. Do not use these products on the day of the scheduled mammogram.

° Check your calendar. “Most women’s breasts are naturally more tender or slightly swollen during the week prior to their menstrual period,” says Alicia Starr M.D., medical director at Baylor’s Women’s Imaging Center. “Try to avoid scheduling your annual mammogram during this time.”

° Dress for comfort. Wear a two-piece outfit with a blouse or sweater on the day of the appointment. While a woman’s choice of outfit will not affect the outcome of her mammogram, most women find it easier and faster to slip off a blouse instead of removing a one-piece dress.

Mammography is a low-dose X-ray of the breast that is currently the most effective way of finding breast cancer in its earliest and most treatable stages. Any possible discomfort during a mammogram should not prevent women from scheduling this procedure. A female registered technologist takes the X-ray. These specialists are trained to position the breast and to set the machine to obtain the best possible image with the least possible discomfort. During the procedure, the woman’s breast is placed on a ledge and gently compressed in order to see all the tissue and any possible abnormalities.

According to Baylor experts, most doctors recommend a baseline mammogram between age 35 and 40 and yearly mammograms starting at age 40 (sometimes earlier if a woman has a family history of breast cancer). In addition to the annual mammogram, women should perform a monthly breast self-exam beginning at age 20, and a woman’s physician should perform a clinical breast exam at least every three years up to age 40 and yearly after age 40.

A NEW KIND OF BREAST SCREENING ON THE HORIZON

In a recent issue of Mayo Clinic Women’s HealthSource newsletter, Deborah Rhodes, M.D., a Mayo Clinic researcher who helped develop the technology, notes that X-ray imagery doesn’t differentiate between tumors and dense breast tissue. On a mammogram, they both appear white. “With MBI, a tumor is easy to see, even if it’s in dense breast tissue,” she says.

With MBI, a woman is given an injection of a short-lived radioactive agent. This material accumulates in tumor cells more than it does in normal cells. Using a radiation-detecting camera, tumors show up as hot spots on the resulting image.

In a recent Mayo Clinic study comparing MBI with mammography, MBI detected three times as many cancers in women with dense breast tissue and an increased risk of breast cancer. Another advantage over mammography: MBI also demonstrated fewer false positives (when results appear abnormal but are non-cancerous).

For now, MBI use is limited to research. The focus is on reducing the dose of radiation needed to perform the imaging. The risk from the radiation dose of one or two MBI scans is extremely low. But to safely use MBI annually or every few years, the radiation dose needs to be reduced.

“Our goal is to have a dose that’s no higher than that from a routine mammogram,” says Rhodes. “If we get results that are similar to, or better than, our last study, we’ll be well on our way to supporting MBI as an option for women with dense breast tissue.”

A new study provides the best evidence we have so far that a psychological-intervention program designed for breast-cancer patients not only improves their health – it actually increases their chance of survival.

Researchers at Ohio State University’s Comprehensive Cancer Center found that patients participating in an intervention program reduced their risk of dying of breast cancer by 56 percent after an average of 11 years. Their study was published in the medical journal Cancer.

Participants in the program, which teaches strategies to reduce stress, improve mood and alter health behaviors, also reduced the risk of breast-cancer recurrence by 45 percent.

“The results suggest that we can help breast-cancer patients make positive steps that may help them live longer and make recurrence less likely,” says Barbara Andersen, lead author of the study and a member of Ohio State’s Comprehensive Cancer Center and a professor of psychology.

In addition to improving survival and reducing recurrence, the intervention program had other positive effects, says Andersen.

Among patients who died of breast cancer, those who participated in the intervention program lived longer – an average of 6.1 years for program participants versus 4.8 years for those who were simply assessed.

“We found a strong relationship between patients’ use of the intervention strategies we taught them and better health,” says Andersen.

By getting enough exercise as a teenager, starting as young as age 12, girls can help protect themselves from breast cancer when they are grown, according to a new study from the Washington University School of Medicine in St. Louis.

Researchers tracked some 65,000 nurses ages 24 to 42 who enrolled in a major health study. The women answered questionnaires about their physical activity starting at age 12. Within six years of enrolling, 550 were diagnosed with breast cancer before menopause.

The women who were physically active as teens and young adults were 23 percent less likely to develop pre-menopausal breast cancer than were women who grew up without exercising regularly, the researchers reported in the Journal of the National Cancer Institute.

The biggest impact was regular exercise from ages 12 to 22.

We’re not talking about participating in extreme amounts of exercise. The women at lowest risk reported doing an average of 3 hours and 15 minutes of running or other vigorous activity per week during their teen years. Some chose walking over heavier exercise.

– Kathy Sena is an award-winning freelance journalist who frequently covers women’s health issues. Visit her blog here on our site.