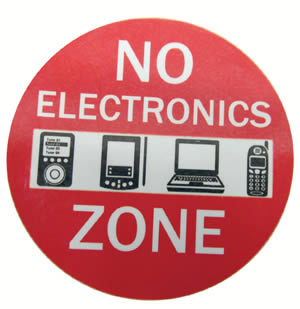 When Joe was in preschool, he longed for a Nintendo DS. Several of his classmates owned them, and he asked repeatedly for one. Christmas rolled around, no DS. His June birthday arrived, no DS. Eventually he stopped asking for a DS and accepted that he wasn’t getting one.

About that time, a generous friend offered to pass along a Game Boy. I thanked her, but said no. I hated to pass up a freebie; me, the queen of recycling, reusing and good deals, turning down a Game Boy!? But. I knew that while the thrill of obtaining this prize would last for a few days, the reality of policing Joe’s (and older sister Laura’s) use would drag on for months.

Eventually my husband upgraded his cell phone, and I reluctantly agreed that he could install a couple of games for the kids on his old iPhone. They now had access to Plants vs. Zombies and, a few months later, Angry Birds was added to their repertoire. Today, Joe and Laura (and dad) play Temple Run on the iPhone, as well as a little Minecraft on the Kindle Fire that Laura got when she turned 11.

Other than these paltry electronic offerings, we are the proud owners of a couple of Wii sports and two Let’s Dance games. We own one TV (a mortifying 24-incher, and do I need to mention that we have the cheapest cable package?), and the kids and I share a laptop that resides in the dining room, in full view of watchful parents.

Yes, I admit it, I am a Luddite. Even though I am on Facebook and LinkedIn myself, and my husband works in the information technology industry, I want to keep my kids’ use of electronics (especially social media) modest for as long as possible.

Don’t get the wrong idea. We aren’t throwbacks to The Little House on the Prairie era. We don’t quilt together, or read out loud by the light of an oil lamp (though both sound sort of nice and homey). My husband spends plenty of time online, and I log on frequently. The kids spend some time on electronics, but because we have so few, they aren’t terribly enticing. How thrilling is a tiny iPhone screen, really? Who really wants to watch the same rated-G or PG DVD for the 25th time? And, no Disney Channel, no Nickelodeon, just good old PBS and the networks.

So they read. They read and read and read. They play outside. Laura goes on long walks with her BFF. We play Connect 4 and sometimes break out the kiddie Monopoly game with Joe. They practice piano and I run Joe to karate a few times a week. They keep busy minus screens. Just Say No. That’s my motto. Once you bring the electronic device into the house, you’ve lost half the battle. Say no, save money and take a trip to the library for some (free!) books.