The Salvation Army Music Program: The Story of Julie and Jerilyn Flores 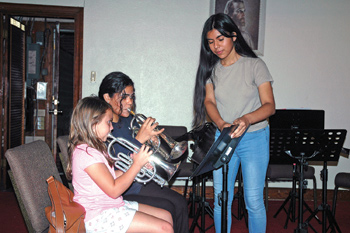 Sisters Julie and Jerilyn Flores plan to study music in college. Julie is considering Shenandoah and Radford because of their music therapy programs. Jerilyn is looking at James Madison University, which has a strong brass instruction program. Neither of them would be on their college tracks had their grandmother not seen a notice that free music lessons were available through The Salvation Army.

Jerilyn, who was in the fourth grade at the time, was the first to enroll. “It was a little scary at first,” she says. “Everyone around me could play, but when I picked up a trumpet I couldn’t make a sound.” Julie, who initially came mainly to watch her sister play, had a similar experience with the trumpet, so she stopped coming for a while. But with the aid of a larger mouthpiece, she was able to play the instrument. She stuck with the trumpet until she discovered the euphonium a couple of years later. Today, both sisters are accomplished musicians. Jerilyn, who now plays piano and cornet, is the deputy band master. Julie will be playing in the National Capitol Band and recently attended the Territorial Music Institute in Texas, an eight-day intensive music and creative arts camp, where she received advanced training. 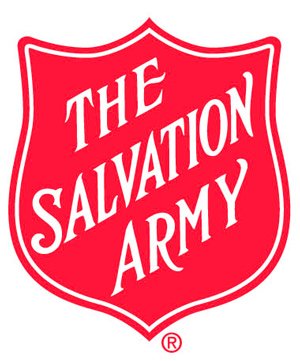 Jerilyn and Julie have been studying music at the Salvation Army for seven and five years, respectively. So, they were prepared to act when the fate of the music program suddenly came into question. Because corps officers Trey and Sheri Jones were able to teach music, there was no need for a dedicated instructor. But when the Joneses were transferred to another post, there was no one to teach the 30 youths who were receiving lessons.

In answer to this, the teens gathered one day in a park to discuss the next semester. They didn’t want the program to end, not only for their own sake, but also for the younger students. Some of the teens were already teaching music, and all of them were advanced musicians. So, they decided that they would take responsibility for the music program, offering instruction to their younger counterparts. In order to continue progressing themselves, they scheduled times when they would gather to support one another in honing their own skills.

Several months later, the Corps hired Mabelynn Dill to be the full-time music director. Recognizing that the teens’ initiative was paying off, both for the themselves and their younger counterparts, Dill decided to continue engaging them in instruction. The younger students were progressing well, and the teens were deriving great satisfaction from their special role.

The sisters admitted that teaching the younger students was sometimes a challenge. “Teaching the kids can be hard because there’s a big age gap. Also, they’re easily distracted,” Jerilyn says. But the satisfactions far outweigh the challenges. “I can see myself in them. I love learning and I know they love learning,” said Julie.

“I love to see the kids improving. It makes them so happy,” added Jerilyn.

“Teaching provides the teens an opportunity to give back, developing a sense of purpose and value within them,” says Dill. It also gives them an opportunity to develop friendships and to share a nutritious meal prior to each session.

The program gives children an exposure to music that they otherwise would not have. It provides a foundation they can build upon as they progress, often playing in their school bands as well. As importantly, it provides positive experiences interacting with other children and adult volunteers. It gives them a place to work with other kids and be exposed to adult role models. “They come to realize that adult leaders care about them. And they develop respect for other people,” says Dill.

Approximately 30 youths participate in the program. The majority are ages 8 through 13. With many having come from disadvantaged situations, some are shy when they begin. But as they progress in their playing and develop positive relationships with other kids, they become more self-assured and outgoing. “It can be a life-changing experience,” says Dill. “Not only do they become more confident, they develop hope for a better future. They learn that good things can come from working hard.”

Because student families are not expected to pay for their children’s music lessons, the program has a tight budget. And all participants are given instruments, so they can practice at home. That means the program requires an inventory of more than 30 instruments. “Fortunately, many of them are donated”, says Dill. “Because we have some large ensembles requiring a variety of instruments, we have diverse needs. Right now, we need cornets, trumpets, tubas, an alto horn, a flugelhorn and a variety of percussion instruments.” If people have instruments they would like to donate, they should call 540-373-3431.

This past summer, Julie and Jerilyn participated in the five-week Music Conservatory at Camp Happyland. In addition to instruction, the Conservatory provided opportunities to share their music ministry through concerts, community outreach projects and visits to nursing homes and hospitals. Throughout the course of camp, participants averaged one to two ministry outings a week, along with three to four recreational trips.

Among those ministry outings were trips to troubled neighborhoods. In spite of some concerns—“We sometimes smelled drugs in the houses we visited,” say the sisters—they found it to be a rewarding experience. Says Julie, “The people who need it most, get it. The people who live in rougher areas embraced us more. They liked seeing kids reach out.” Regarding her objectives for participating in the Conservatory, she adds, “I wanted to come back to my corps as a better musician, but I also wanted to come back as a better person.”

When they entered The Salvation Army music program, Jerilyn and Julie expected to learn to play an instrument, but the experience has given them much more. Having started at such a young age, Julie grew up with the other kids. “We’re all like family,” she says. “It’s even more than being friends.”

Participation in the program has also given them a spiritual awakening. “I like that there’s music and there’s God,” Jerilyn says. “If I hadn’t been involved in the program, I wouldn’t have been spiritually involved either.” Adds Julie, “The greatest thing I’ve gotten from being in the program is learning to praise the Lord by playing an instrument.”

Participating in The Salvation Army music program has had a tremendous impact. Julie and Jerilyn have become accomplished musicians. They have derived great satisfaction from helping others. They have learned that they can accomplish much by applying themselves. And they have committed themselves to Christ. None of this would have happened had their grandmother not noticed an article about The Salvation Army music program.