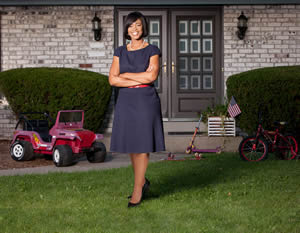 Becoming a reality television star was the farthest thing from Deborah Tillman’s mind. The Woodbridge native and star of the Lifetime reality series America’s Supernanny was cast into the role due to the success of another role she didn’t plan to enter: childcare.

An accountant by degree and trade, Tillman had placed her son in several daycares while she and her husband worked. After going through seven, she quit her job as an accountant to start a home-based school for her son and children in her neighborhood.

“I had gone through seven providers and one day I came [to the provider’s] a little early and found him in a bassinet. His bottle was empty and lying against a wall. It would have broken your heart,” she recounted.

She then took the required 25 hours of childcare provider courses needed to qualify to open her own daycare. Within seven months she had three children. Word about her refreshing approach to childcare spread and before long, she was handed over a center to own and operate.

In 1998, with an ever-growing waiting list, Tillman was given a second center when an area provider decided to leave the post.

“I was like, ‘Oh my goodness!'” exclaimed Tillman. “I couldn’t believe I was given two centers just like that. You just do the best job you can and someone will recognize your hard work.”

“I was sent an email to audition for the American Super Nanny. They asked if I wanted to be considered. I said ‘yes.’ They flew me out to California into a house with problems and told me to ‘fix it.’ After that I was offered the job,” said Tillman.

She filmed her first season in September of 2011. She spends four months out of the year on the road going in and out of troubled homes teaching discouraged parents how to take control over their chaotic houses. Her job is rewarding and she keeps in touch with all of the families that she has helped. And they in turn continually express their gratitude for her with their return correspondence.

TIPS FOR PREPARING KIDS FOR SCHOOL

• Communication. Talk to your child about going to school. Transition is the biggest part. Kids are really good at bouncing back, but parents have a hard time. “You’re going to big boy school, let’s get your book bag” Really prepare.

• Play Dates. Take the child to the school for a day the week before they are to start. Get them in the habit of knowing what the schedule is going to be like. If kids don’t know what to expect, they get out of balance. Show them and they’ll get it. Once they know that mommy and daddy are bringing them there to learn and are coming back, they will settle better.

It doesn’t take a child a lot to prepare. This is their world, not yours. They’re ready. It’s the parent who usually isn’t ready. Positive parenting works. Be excited for the kids and let them feed off of your excitement.

TIPS FOR PARENTS TO PREPARE FOR SCHOOL

• No Fear. Parents can call as much as they want to check on their children. Get comfortable. Get acquainted with the teachers and the directors. Keep the dialogue open.

She recently completed filming her second season which premiers on Lifetime on January 8 at 10 pm eastern time. Tillman works with each family on camera “12 hours a day for five days per week” she said. Her upcoming season has her situated with overnight stays.

Tillman, who holds a master’s degree in Education from The George Washington University in Washington, D.C., has been working with children for the past 25 years. She treats each family she meets as though they were her own.

The reality star, author and director of Happy Home Child Learning Center credits her husband and her son for standing by her in her endeavors. Zeplyn, the toddler who changed her destiny, is now at Georgetown University.

“He likes to joke that he started it all,” she laughed. “But out of all of the titles I have, being a mom is the best. Knowing that I was able to raise a well-adjusted, compassionate human being into the world.”

GO WITH YOUR GUT. Do a tour. Narrow it down to five schools and visit each one. Some schools will give good customer service, but that’s not what you’re looking for. Keep an eye out on the teachers. Do they look happy? Do they look frustrated? How long have they been there? How long has the management been there? You want some sort of longevity. You want an educated director. Not someone who is really young. It’s not babysitting. You have to have someone who can exercise wisdom and discernment. Look at the curriculum. What is your child going to do all day? There should be something visible that shows what they are learning.

IN-HOME DAY CARE CONSIDERATIONS. I would love for a child to be in a wonderful in-home provider from 0-12 months. They get a lot of nurturing, communication, one-on-one eye contact, which is wonderful. In schools, they have routines.

In home situations can better meet the needs of infants. You want to make sure they’re licensed. Visit without them knowing you’re coming. Make sure they’re feeding them, listening to instructions from their parents, they have MAT training, CPR certification and criminal background checks completed. Make sure they don’t have visitors coming in and out and get recommendations from other parents who have been there for a year or two.