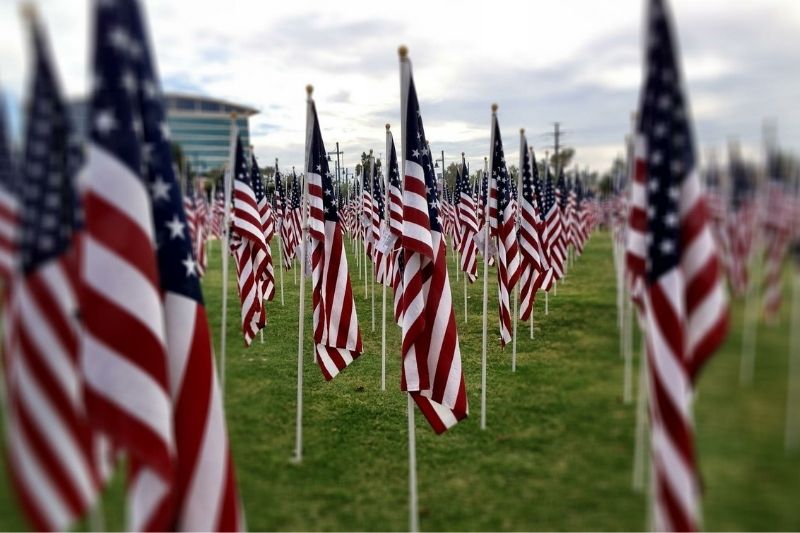 Caller: There’s an inbound to D.C.

Me: Any targets ID’d?

Dialing: Sir, this is LTC Flett, there’s an inbound to D.C.

Me: My husband in the Pentagon.

My husband and I spoke for the first time about our 9/11 experience to a class of Homeland Security High School students in New Jersey last year. I’ve done a lot of public speaking, and we both are used to talking to large crowds. This was harder. It was raw and cathartic, a relief and a burden. Harder for my husband. For so long we didn’t talk about it. Every year I would post the above exchange as my connection to that date, and every year would cover-up the details with our determination to not face the events of that day.

As you remember the day was clear and crisp with blue skies and puffy clouds. My husband couldn’t see the sky that morning. He reported to work 6 p.m. on September 10 to his post in the Army’s Command bunker. We used to joke that Steve’s job was ‘briefer to the stars.’ He was on the Chief of Staff of the Army’s Watch and worked with a team to prepare the morning intelligence briefings for the key Army leaders at the Pentagon. I was the deputy office chief of an office at the Defense Intelligence Agency. My ‘office’ was responsible for providing intelligence analysis of strategic issues pertinent to a set group of countries. They were pretty significant countries in terms of world consequence. One of our smaller ‘accounts’ was Afghanistan.

Through the large window in my office hallway, I could see the Pentagon. That would be of more angst than comfort as the day unfolded. I was 32-weeks pregnant with our fourth son and 41 years old. The other three boys were under the age of five. It wasn’t easy to make a dual military career work with such small children, but we were doing okay. We’d made the shift to a nanny after our third son was born, so we didn’t have to worry about pickups and drop offs.

After the first plane hit, my senior intelligence officer was in my office. My boss was on extended medical leave and Cathy and I were the leadership of the 100-plus analysts in our office that day. When the second plane hit, I looked at her and said, “Cathy, this isn’t an accident.” She said something to the effect of, “No, it is not,” as she rushed from my office. The phones started ringing and the process of getting our analytical arms around the events was in motion.

At 0931, I got my husband’s phone call. Others were in my office now as word had spread of the inbound to D.C. Within seconds of hanging up the phone; I looked up and saw the reporting of the attack on the Pentagon.

Everyone was talking at once, and then it struck us—all at the same time it seemed—my husband was in that building. No one said a word to coordinate their exodus, but they all quieted and left me alone. The phone started screaming; family and friends frantically calling to find out about Steven. I don’t remember many of the calls, but I do remember saying to my niece Kristin,

“Kristin, there is nothing I can do for him right now.”

It’s a soldier’s nature to rush to the sound of the fight. But we also know how to pick our fights, and when we are not a force multiplier in one spot, we learn to impact things in another. After a couple of minutes of quiet, I stood up, looked out the window of my office and said out loud, “Okay hon, I know if you’re alive, you’ll make it out. We’ve got work to do.”

The Army’s bunker is deep underground. When the plane hit the Pentagon, Steve and his coworkers didn’t hear a thing. There was an announcement made by the two-star general that the plane had impacted the building above them. The bunker floor quieted and everyone turned back to their work.

Steve did get out of the Pentagon, but it was much later that afternoon when a call came from the Capitol Hill Sergeant at Arms. They needed someone to brief the Senators and since the majority of intelligence seniors were at a conference and now grounded elsewhere due to the ‘no fly’ order, that duty fell to Steve.

So around 5 p.m. my husband and a reserve officer who was a policeman as a civilian left the bunker.

Steve compares the hallway they walked through to a cloud you fly through. They couldn’t see anything into the cloud, so they felt their way down the hallway of the Pentagon, through the smoke and the debris; counting the doorways, feeling the wet concrete bumps with their hand and running their finger in the little ridge between the concrete blocks. That indentation kept his hand straight on the wall as they walked to reach the stairwells. From there they started to ascend and leave. They couldn’t see so the task was now count the steps, hit the stairwell landing, turn; count the steps, landing, turn.

After a drive on streets that were empty except for police guarding every intersection, Steve reported to the Capitol guard shack rubbing shoulders with senators as they squeezed past beside him. Remember the images of the our national leaders singing on the steps? Steve was just off camera. The senators didn’t want him in the shot for fear of leading with a military presence too early in the situation. In hindsight, they were right.

When he was done, Steve found a ride back to his post, through the empty roads of D.C. He doesn’t remember how, nor does he know from whom. While others were still evacuating their things from the Pentagon and firefighters were working to quiet the active fire at the impact site. Steve, who had now been on duty for more than 24 hours, felt his way back to his post. He could see when he first entered the building but as he got closer to the bunker the smoke, ‘the cloud’ grew more dense. Steve found his stair well and descended, counting the steps down this time; landing turn, count, landing, turn, count, landing, turn. He felt the stairwell exit he couldn’t see; stepping over debris that threatened to trip him and reconnected his hand with the concrete bumps and lines down the hallway to lead him back to his post.

The morning just before the initial attack in D.C., Steve made one call before he called me. It was to our home. He told the nanny to leave the TV off and to stay put. She soon found out why after the Pentagon was hit. Intelligence showed there was a second inbound to D.C. We didn’t know the heroes on flight 93 would crash in the field in Pennsylvania, saving lives in our capital.

When Steve talked to someone about that day they asked,“You were anxious because you thought there was another plane headed to D.C.?”

He said, “No, I knew there was another plane headed to D.C. I was anxious because I didn’t know where it would hit.”

Welcome to the world of intelligence. Where the monster under your bed is real.

Our oldest son Jake was 5 and at home with our nanny. While the nanny showed diligence in keeping the images off the screen, Jake did see some initial reports.

“Is Daddy’s shirt ripped?” he asked her as he saw people streaming out of “Daddy’s Pentagon.”

Years later, we continue to deal with the suppressed feelings of panic Steve couldn’t/wouldn’t acknowledge while walking down those smoke-filled corridors after the attacks.

“No honey, but a piece of him is torn forever.”

After the initial report and the CNN scenes, I didn’t see many of the images that day, and it would be about three weeks before I saw and talked to my husband. We were working the intelligence at both duty locations with me 32-weeks pregnant sometimes getting to work at 3 a.m. and getting home 20 hours later and Steve often just sleeping on the floor in the bunker. On rare nights, he’d come home for two hours to sleep in our bed.

I knew he was there before I saw him because I could smell the smoke from his uniform.

As I age, I realize the pure fury we all felt by the attack on 9/11. The sense of invasion and the feel of the sucker punch at the start of the fight. Soldiers don’t deal well with a sucker punch. The name itself describes the act of a coward. On September 12, there were many who did not come to work in the nation’s capital and I get it. There was fear, sadness and a sense of loss across the nation. But the Pentagon, the military, our police, fire, FBI units, first responders and our intelligence agencies were serving in force. Our response to our sadness was a show of resolve.

When you are military and work in D.C., you wear the military equivalent of a suit. We called it our Class A uniform. On September 12, by order of our leadership, all military in the capital region reported to duty in our battle dress uniforms or BDUs. We were manning our posts for a fight.

I’ve come to understand we are a part of history. We are one of the stories from ‘The Other Ground Zero’ and for the sake of generations raised after 9/11, these stories are of value to share.

While sitting poolside, thinking of ideas for my next column, my thrifty budget-conscious friend curiously asked if I had a list of hidden-gem deals...
Read more

While sitting poolside, thinking of ideas for my next column, my thrifty budget-conscious friend curiously asked if I had a list of hidden-gem deals...
Read more
Articles

Sixty-seven percent of individuals in an American Massage Therapy Association survey said their main reason for getting a massage in the last year was...
Read more
Ages & Stages

How to Raise an Avid Reader

In the current technology age, more kids are flocking to screens for entertainment. While some benefits can come from being able to use different...
Read more
Load more