Hosting a Joint Birthday Party for Your Child 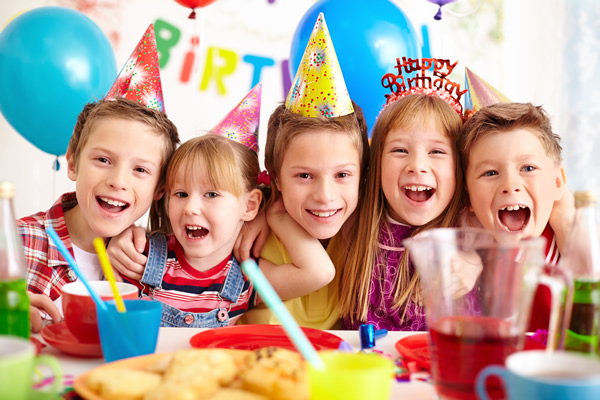 “More parents are starting to have joint birthday parties with other families for their children. This growing trend is the reverse of the ‘Let’s Outdo the Jones’ mentality of a few years ago,” says Jodi Smith, President of Mannersmith Etiquette Consulting. “Parents are returning to sensible and reasonable parties instead of excessive parties.”

For the last three years Hedi Waterfield has hosted three joint birthday parties for her daughter with three different friends. “They are great for saving on costs and reducing the workload since you can divide the tasks between the families,” says Waterfield. Another benefit of joint parties is that the families attending the party only have to attend one party instead of multiple parties.

Should You Have Joint Birthday Party?
When considering a joint birthday party, Smith advises parents to think about if the birthday kids like each other and get along. They do not need to be best friends, but should enjoy each other’s company and have similar interests. Smith says that the next question that parents should ask is if they think that they can work with at least one of the other parents.

Realize that when you host a joint birthday party with another family that you will be giving up some control over the party. “Accept that the party does not have to be perfect. Your kids will be happy with good enough,” reminds Smith.

Another variation on the joint birthday party is to have a sibling joint birthday party if your kid’s birthdays are within a few weeks of each other. Since kids often have more of tendency to be jealous of their siblings than a friend, make sure that both kids are in agreement with a joint birthday party. Be sure to point out the benefits of having a joint party, such as having the party at a fun location instead of at home or being able to invite more friends because of the reduced costs.

Planning the Party Together
After you have decided that a joint birthday party is a good option, sit down with the other family and discuss the details for the party. One of the most important topics to discuss is the budget for the party. Discuss both the overall budget and budgets for specific items, such as how much to spend on the invitations or the decorations. Smith reminds parents that one family’s idea of a typical birthday cake might be to go to a specialty bakery spend $150 on a cake while another family may usually buy birthday cakes from the grocery store.

The next detail to discuss is the venue and theme for the party. Smith recommends that joint parties be held at neutral location, such as a bowling alley or park. This helps both families have more equal say in the party and one family is not bearing the majority of the setup/cleanup work. Make sure that both kids agree and are excited about the theme for the party.

Another important topic that you should discuss is the invitation list. Families should agree on the mutual friends to invite to the party, such as the entire class or group of neighborhood kids. Oftentimes for joint birthday parties, each child will invite an extra child or two, such as a cousin or neighborhood friend. Smith recommends dividing the costs for the joint invitation list and then each parent contributing on a per child cost for any extra children.

Talk openly with the other family about the best way to handle presents. If the party is for two children, then it is fine for the guests to give presents to both children. However, if a guest would not have attended one of the child’s parties, then they do not need to bring a gift for the child that they do not know. If the party is for three or more children, you may want to have guests not give presents at the party because at that point the amount of presents becomes overwhelming. Smith recalls a joint party for four boys where each guest was asked to bring only one present for an eight-year old boy, and the birthday boys each went home with a few presents. Because of the time involved opening presents and the fact that the children will be receiving different presents, Smith recommends not opening presents at joint birthday parties.

On the Day of the Party
During the party, be sure to introduce any guests who do not know each other and encourage everyone to mingle. Melinda Mallari has hosted several joint parties for her kids and recommends having a separate cake for each child. This allows each kid to select the cake that he wants and gives each child a set of candles to blow out. Be sure to sing “Happy Birthday” twice so that each kid gets a song.

After the party, both families should help with any clean up tasks. Although, the money should not be settled during the party, try to settle money as quickly as possible after the party. Smith recommends that the parents pay each other with checks instead of cash so that that the money was exchanged and there can be no question about the amount paid.

“I highly recommend having joint birthday parties. It is a wonderful way to celebrate your child’s birthday while watching your budget,” says Smith.

SPONSORED BY Elf on the Shelf has become a fun, family holiday tradition in many households. Need inspiration for some new pranks? Try some of...
Read more

THE PROBLEM: My 16-year-old daughter tells me everything. I know this is a good thing (at least, I think it is), but I feel...
Read more
Load more