ASK MOM: Son gets frustrated and cusses at mom 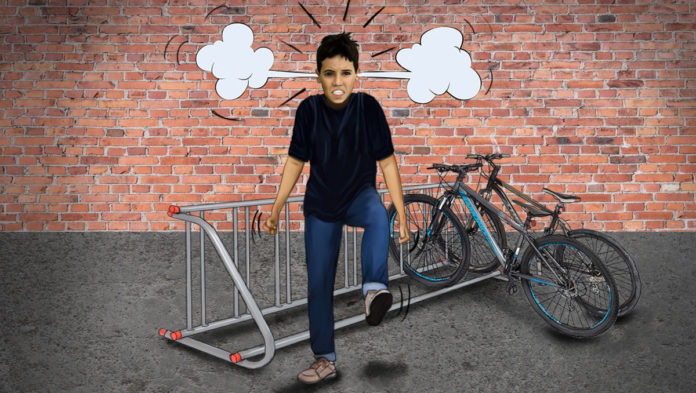 Son gets frustrated and cusses at mom

by Mary Follin and Erika Guerrero

THE PROBLEM: My son gets frustrated soooo easily. He’s eleven, but he’s always been like this. He gets impatient if he doesn’t know how to do something right away, and throws what I call a ‘mini-fit.’ He doesn’t throw tantrums anymore, but he stomps around, clenches his fits, grits his teeth, like he’s about to explode. Yesterday, when he was trying to unlock his bicycle and couldn’t get the numbers to line up, he shoved the bike over and said a bad word, aimed at me. He’s usually respectful toward me, but when he gets worked up like this, it surprises me how he cusses and acts like, well, a baby. I tell him treating his mother that way is not allowed, and he’s pretty good about apologizing, but I’d love some ideas on how to handle him when he gets in this mode.

MARY SAYS: During one of these episodes, your son most likely feels better after letting steam off, after which he regains his composure and carries on in a more mature way. But unfortunately, what he’s actually doing is practicing, engraining a habit that has become increasingly annoying (and uncomfortable) for you the better he gets at it.

A lot of people aren’t as forgiving as you are, so helping him find a new way to relieve (or avoid) frustration is a good idea.

Besides, as the tension builds, your son is probably not too happy about it, either, which is where you need to start. Have a conversation with him at a time when he’s relatively at ease. He might resist, but you need to forge ahead, for his sake and yours.

Tell him you’ve observed his explosive behavior, and it’s upsetting to you to see him so overrun by his emotions. Ask him how he feels about it! He may have never given it much thought. But awareness is key, and he might be willing to entertain a solution, since ‘blowing up’ has got to be pretty hard on him, too. Then again, he might just shrug and say it’s “no big deal,” in which case it’s up to you to tell him it is.

Let your son know it hurts you when he treats you with disrespect, and that other people likely won’t care too much for it, either. Assure him that everybody has times when their emotions are disproportionate to a situation, and that it’s a skill to learn how not to let that happen.

For starters, ask him to recognize his physical reaction when he gets upset. He might tell you he feels “hot,” or that his chest tightens up. Or he might feel like punching something.

Once he’s identified the biggest symptom at onset, ask him to choose a cure. Too hot? Imagine slipping beneath a cooling waterfall. Tight chest? A pretend, chest-sized wrench should loosen that up. And if he feels like punching something, suggest he loosen his grip and shake his hands, vigorously.

Whatever he chooses, encourage him to do it every time. Assure him that eventually, his mind/body system will develop a new habit, and he will be able to approach any task with ease.

ERIKA SAYS: Mama, this raises a lot of concerns and questions for me. Your son’s inability to regulate his emotions is “normal” for a 2-year-old but disconcerting for a child his age. It sounds like expressing his frustration has progressed from tantrums to aggression—and now includes disrespect, which should not be tolerated. There’s no reason why anyone, including you, should be walking on eggshells around your son or living in a less-than-peaceful home.

Off the bat, I question if this is a learned response. Is someone in your home easily angered? Has your son witnessed this kind of behavior? If this is something he’s witnessing on a daily basis, my suggestion is to address the problem at its source. Our children are constantly watching how we interact with others and how we allow others to treat us.

When your son gets angry and throws a mini-fit, it’s important that consequences for his behavior are forthcoming. Don’t punish him for getting angry, but rather for disrespect. When he cusses at you, wait until he is calm before letting him know you will not tolerate his speaking to you like that. (Don’t try this while he’s worked up, as it will only amplify his fit. When a child is in his feelings, he’s often difficult to reason with.) Meting out consequences for your son’s behavior will increase his awareness of how he reacts when he gets emotional.

Feeling anger is an emotion we can’t turn off, but it’s something we can process and express in healthy ways. You can model better behavior for your son. For me, when I feel myself getting upset during a conversation with my son, I’ll tell him, “Mommy, is getting really upset, I can’t talk about this right now. Let’s talk about it later. ” When I do this, I want him to know that I’m not dismissing his thoughts or feelings, and that we can revisit the discussion when I am calmer. I also let him know that when you say something out of anger, you can’t take back how you made the other person feel.

If you continue to struggle to help your son control his emotions, consider seeking professional help. A therapist can advise you on anger management tools to practice using with your child at home. In addition, any medical issues that may be contributing to the problem should be ruled out. I encourage you to stay strong and not grow weary or discouraged. Teaching children how to manage their emotions is an ongoing process, a skill that can take a long time to learn

SPONSORED BY Elf on the Shelf has become a fun, family holiday tradition in many households. Need inspiration for some new pranks? Try some of...
Read more

THE PROBLEM: My 16-year-old daughter tells me everything. I know this is a good thing (at least, I think it is), but I feel...
Read more
Load more