ASK MOM: Mom Loves One Child More Than the Other 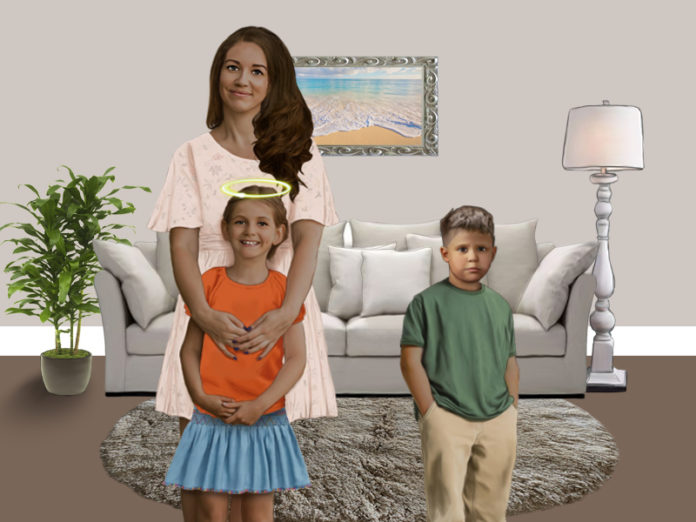 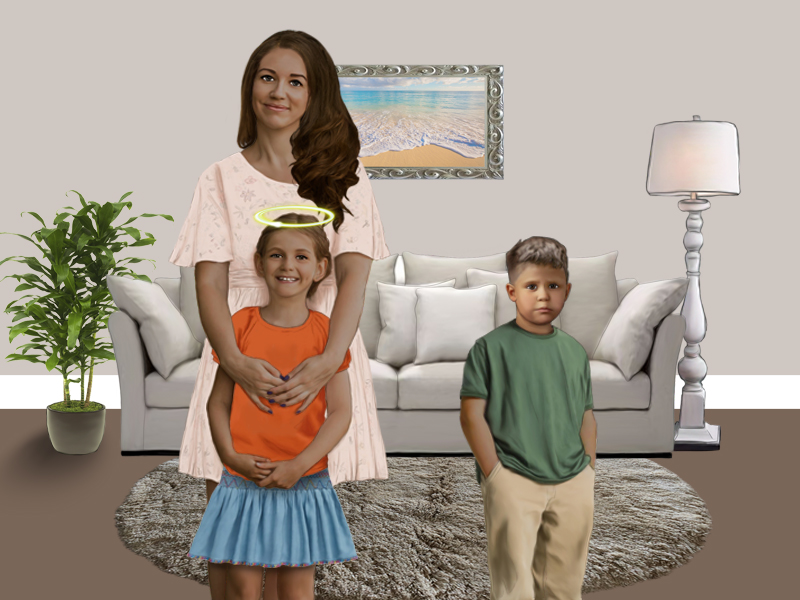 Mom Loves One Child More Than the Other

THE PROBLEM: My daughter, who is now eight, was so easy I couldn’t wait to have another. As a baby, she had a smile for everyone. She’s the kind of kid who will busy herself with a coloring book in a restaurant, and she hardly ever puts up a fuss when I ask her to do something. But then, a year-and-a-half after she was born, we had Adam, who was unhappy from the beginning. He screamed a lot for the first two years, and still fights with me on EVERYTHING, even though he’s seven, old enough to know better. The problem is, I’ve finally admitted to myself that I love my daughter more than my son, which is about the worst thing I could do for both of them. I feel so ashamed, like I’m a terrible mother. Shouldn’t I love them both the same?

MARY SAYS: Aaahhhh, the blessing and the curse of an easy firstborn. When new parents have the kind of baby who coos at strangers, sleeps through the night, and naps on long trips, it’s tempting for the happy couple to believe they’re pretty good at this ‘parenting’ thing. It might even tip into judgy, especially when their friends pop out a screamer: “Just pat him on the back and he’ll go right back to sleep,” you say, or “Try a pacifier, that worked like a charm for us.”

Unwittingly, these two think they’re the ones who created such a model human being. And to a degree, they have. But then along comes baby number two, an alien who drops into your otherwise happy home. This one takes charge from the get-go, and you’re never quite sure how to please your new boss.

In other words, children are like a box of chocolates. You never know what you’re going to get.

What complicates the situation is that children often have personalities similar to one parent or the other. I am guessing your daughter’s temperament is like your own, which is why it’s been so easy to engage with her. Adam, however, sounds like he has a different personality type, one that may even remind you of someone you were never too crazy about. (Mom? Dad? Aunt Lil?)

But they are both yours, which is why you are concerned about your feelings toward Adam.

For starters, let’s talk about the word ‘love.’ Love can’t be divided or split in two, it can’t be measured. Be assured, you have plenty of love inside of you for both of your children and all the other children in the world. Love is whole and complete, impossible to ‘parcel out’ to one more than another.

When you conclude you love your son more than your daughter, it’s more likely that Adam is triggering something inside of YOU you don’t like. Or that you’re triggered by. Or ashamed of.

And for Adam’s sake, it’s important you figure out what that ‘something’ is.

Using pen and paper, write down everything about Adam that drives you crazy. (Something about writing by hand helps to reveal the truths we are trying to get to.)

Now it’s time for reflection, pen still in hand. Was there ever a time you were scolded or shamed for acting out? Talking too loud? Maybe your teachers complained that you never listened, talked too much, or couldn’t follow directions. Maybe the opposite was true, and you NEVER spoke up. Early on, perhaps Mom or Dad convinced you that what you had to say wasn’t worth hearing, and now you have this child who says whatever is on his mind as loud as he can.

Try and recall when the original wound was inflicted, and you might understand why you react so strongly to Adam. Once you are able to identify these characteristics in yourself, you will see your son as a gift you’ve been graced with to help you embrace your own injured places, ones that have been hidden in shadow for too long.

If you do this, the healing can begin—for yourself, and for the beautiful boy who has been placed in your care.

KRISTI SAYS: The idea that we should love two people the same way only sets us up for failure. However, in parenting, it’s important to treat your children with the same amount of love and respect if you don’t want to breed resentment. Children pick up on our emotions and behaviors. They know when they aren’t the favored one, and this can lead them to behave in unlovable ways.

There are two separate issues at hand here, and both need to be addressed. One is how you feel, and the other is how you behave.

Let’s start with your feelings. It sounds like your daughter was one of those babies that most people can only dream about. Easy, compliant, and smiley. Your time with her peaceful disposition was cut short by Adam, who entered the world with needs you struggled to meet. You wanted to make him happy like your daughter, but he didn’t comply. On top of that, they were so close in age you were raising two babies together.

Adam just felt hard, which can lead to disappointment.

You’ve been holding onto that letdown for 7 years, and now you’re admitting to yourself you love her more. It sounds like you’re throwing in the towel and giving up on what could be a beautiful mother-son relationship. Comparing him to her and wondering why he can’t be more like his sister may be what’s at the crux of this issue.

A few important things to understand:

All children need to be shown love. They also need your time and attention. If your feelings toward your son are causing you to withhold love, then I would encourage you to work on this. If you are withholding love because your son isn’t doing what you think he should, then your love toward your children is conditional. Perhaps that was how you were raised, so it’s understandable, but it sounds like you want to do better.

If you want to improve your relationship with your son, start by treating him as a unique individual. He’s not the same person as your daughter, and it’s unfair for you to expect the same things from him.

Try carving out 30 minutes each day, just for him. Go to the park and kick a ball around or do a messy art project. Read him his favorite book for the millionth time.

Also, watch your words. Have you ever said: Why can’t you be more like your sister? or I can’t believe you did that again, or even When are you going to grow up? As parents, we say things out of frustration, but starting now, you’ll want to be more intentional about what you say to your son. Use your words to build him up, not tear him down. If you observe something positive, praise him for his efforts, no matter how small:

“I really liked how you built that tower with your blocks. It was so smart and creative.”

“I enjoyed playing at the park today. When do you want to do that again?”

“You’re doing a great job getting ready for bed. Thanks for putting your pajamas on so quickly.”

Correct his behavior when necessary, but don’t compare his behavior to his sister’s. Gently correct him if he’s disrespectful, give him natural consequences when he acts up, and understand that he needs a different approach than your daughter does.

If you change your behaviors, your feelings will eventually follow. You’ll discover one day that you don’t love your daughter more, you just love your children differently. The truth is, they are two exceptional, beautiful human beings who need to be loved by their mother in unique ways

How Can I Protect My Autistic Son from Bullying?

Dear Ms. Lydia, I am the father of three children, ages 5, 7 and 9. My 9-year-old son has been diagnosed with autism at a...
Read more
Articles

Helping Hands Inc. in Stafford has helped children develop the skills they need to get the most out of life for the past 15...
Read more
Articles

Several Rappahannock-area authors have used their downtime during COVID-19 to create new works. A new world for young adults to explore: The UnImaginables by Jen...
Read more

How Can I Protect My Autistic Son from Bullying?

Dear Ms. Lydia, I am the father of three children, ages 5, 7 and 9. My 9-year-old son has been diagnosed with autism at a...
Read more
Articles

Helping Hands Inc. in Stafford has helped children develop the skills they need to get the most out of life for the past 15...
Read more
Articles

Several Rappahannock-area authors have used their downtime during COVID-19 to create new works. A new world for young adults to explore: The UnImaginables by Jen...
Read more
Articles

More than a decade ago, Todd H. Bol paid tribute to his deceased mother, a teacher and avid reader, by constructing a tiny schoolhouse-shaped...
Read more
Articles

An educator for roughly 20 years, Tracee Fisher has always searched for ways to make her teaching experience more beneficial for her students. A...
Read more
Load more