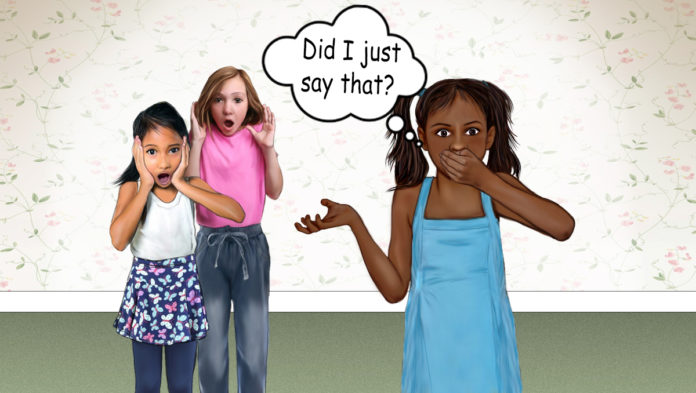 by Mary Follin and Erika Guerrero

THE PROBLEM: My seven-year-old daughter has a bad habit of blurting out inappropriate things. She’ll say stuff like: “Johnny doesn’t like you,” or “We don’t want to play with you.” I know these comments sound mean (and they are!), but she’s not a bully. She’s actually a very caring little girl. It’s just that there are times she can’t help saying what’s on her mind at the moment. When she does this, she always regrets it later. She has a sweet group of friends, and they are consistently surprised at the things she says. She even asked me once why she couldn’t stop herself. I suggested she try and think before she speaks, but she doesn’t seem to be able to remember to. Any ideas?

MARY SAYS: The ability to recognize (and stop) our words before they ‘pop out’ is a skill; one your daughter can learn. Oftentimes, awareness comes through feedback. When someone continually offends people and puts them off, he or she eventually gets the message.

It sounds as though your daughter is just beginning to pick up on this.

Seven years old is an age where childish behaviors reign, but reason also begins to kick in. Clearly, your daughter sees what she’s doing and is asking you for help, which is a good thing. In fact, by taking this first step, your daughter is already closing in on a resolution.

What she needs now is a tool. While you’ve encouraged her to think before she speaks (a wise admonition for all of us), mental devices are challenging for children. Even as adults we have a hard time ‘remembering to remember’ what our minds are supposed to do at any given moment.

So, let’s switch to something less imaginary, something your daughter can feel and touch.

Buy her an elastic bracelet, a pretty one, made of beads. Suggest to her that she use the bracelet to remind herself to stop for a moment when she feels unable to control her words. When she slips onto that precipice where she’s about to blurt something out, suggest she give her bracelet a ‘snap.’

A child she doesn’t know walks up to her circle of friends? Snap! Somebody has a rash on their chin? Snap! A playmate has her shirt on inside out? Snap!

At first, your daughter will have days where she’s ‘snapping’ all day long. In fact, she may even go through a few bracelets! But over time, she’ll be delighted to find she’s trained her mind to respond in a new way. Not only will she start taking a moment to think before she decides to either say or not say what’s about to come out, she’ll also discover at this young age that her mind is not the boss of her. Rather, it’s the other way around.

ERIKA SAYS: Kudos to you for recognizing that your daughter lacks impulsivity control, a skill one isn’t born knowing, but can be learned. If this tendency isn’t corrected, it could lead to behavioral issues, including poor decision-making as a teen—or even as an adult.

At the age of seven, children don’t always know a better way to solve an issue, so they just say what comes to mind. It sounds like your daughter is not fully aware of how hurtful her words are while she’s saying them. Thinking before she speaks is a practical tool, but truthfully, she probably lacks the maturity to understand the concept.

A good way to start is to help your daughter understand the after-effects of her actions, which will teach her to be more empathetic toward others. When you hear her say things like: “We don’t want to play with you,” jump in and let her know: “When you said that to Johnny, it made him feel sad.”

Pointing out that her behavior is not appropriate right when it happens is key, as well as guiding her in different ways to approach a situation.

My son had an indoor trampoline when he was a toddler. When he would have a friend over, he couldn’t understand the concept of taking turns. He would often end up fighting with his friend or throwing a fit. I would point out—right away—that he was not being very nice to his friend and was hurting his feelings. I would then present him with two options: they could each jump five times and then switch off, or he could find something else to play with while his friend jumped on the trampoline.

Once your daughter has an understanding of the impact of her actions on others, you can begin practicing thinking before speaking or “stop and think” as I call it in our home. I like to tell my son that before he reacts, he must stop and think about what will happen if he proceeds. Will his actions yield helpful or harmful outcomes? As you begin to see changes in your daughter’s behavior, reward her for it. Applaud her for controlling herself and treating a friend with kindness when she might have said something hurtful. Let her know how proud you are of her for remembering to think before she speaks

Four area experts talk about trends you can look for in 2023   Remember all of the anticipation and fanfare that we entered the ‘20s with...
Read more

Four area experts talk about trends you can look for in 2023   Remember all of the anticipation and fanfare that we entered the ‘20s with...
Read more
Editor's Note

How we handle tough times leaves an impression on our kids   Welcome to 2023. If you've been keeping score, this decade we've endured a pandemic, parts...
Read more
Sponsored Content

Let’s All Move Forward Together in 2023

Community Bank of the Chesapeake brings a local touch to money management   Banking can feel like an impersonal game of numbers when you are one...
Read more
Load more