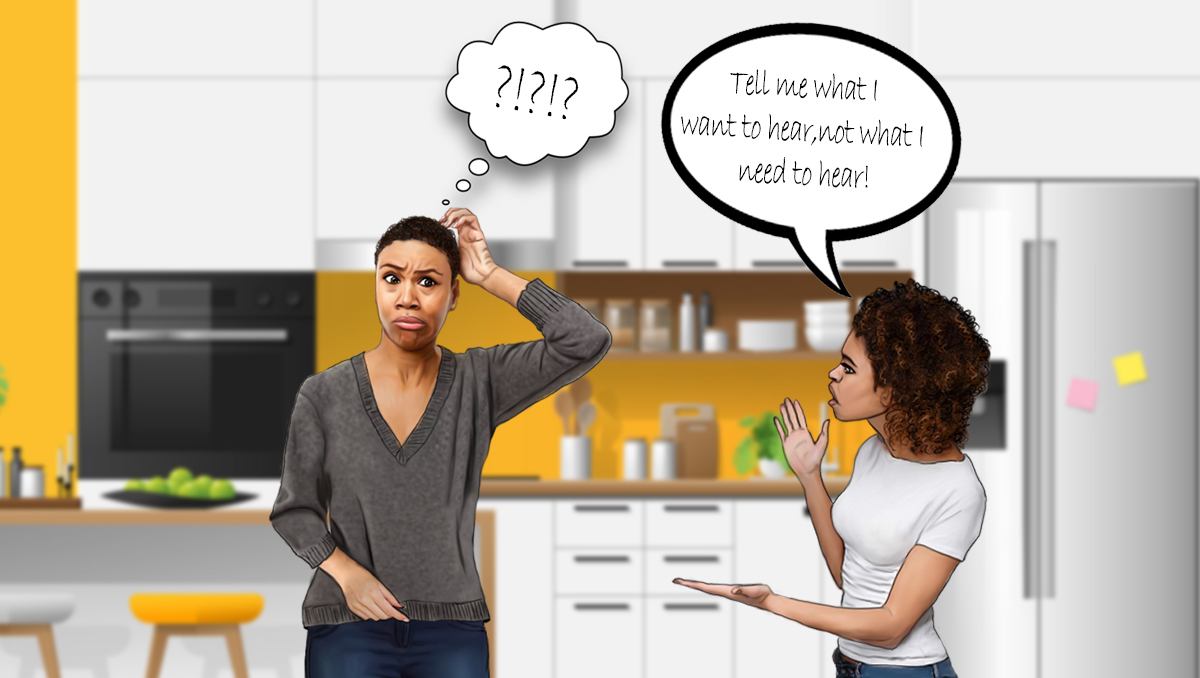 THE PROBLEM: My 16-year-old daughter tells me everything. I know this is a good thing (at least, I think it is), but I feel like she depends on me too much to support her. For example, last week she was complaining about one of her teachers who did something that sounded pretty unfair to me. I said something like: “Well, there are a lot of people who aren’t particularly fair-minded.” Or, when her friend left her out on a shopping trip, I told her that it surprised me, too, and I could see why she was hurt. (I did actually think it was mean, but I just wanted to empathize with her, so I didn’t say her friend was mean.) I try not to present a different way to look at a situation because she never listens to that. Usually, she just argues until I find a way to see things from her perspective. I feel like I’m doing something unhelpful, here, but I don’t know how to change it.

MARY SAYS: Blaming others is a sneaky thief. It feels empowering, but in reality, the blame game robs us of our own agency. Your daughter may experience a momentary spike in self-worth when she judges others, but unfortunately, when she does this, she’s taking on the role of victim, over and over again.

Kudos to you, Mom, for recognizing that you’re enabling her habit, because your response to your daughter’s complaints are entirely within your control.

Start by stopping. When your daughter solicits sympathy from you, don’t offer it. Your unwillingness to engage is the first step in changing the dynamic between the two of you.

But there’s more. Rather than leaving your daughter hanging, invite her to see how much suffering her judgements are causing. The momentary pleasure of blaming someone quickly turns into something unpleasant, a fleeting high followed by a crash, an internal knowing that constant criticisms actually reflect one’s own lack of self-esteem.

If your daughter truly understands this, she will be motivated to change. Here’s where you can help! The next time she tries to engage you in her less-than-flattering story about someone else, respond with a question. For example:

Daughter: Susie totally dissed me about going to the mall today.

You: What do you think about that?

Daughter: It makes me sooooo mad. She’s such a snob.

You: Is it possible she has something else on her mind?

Daughter: What do you mean?

You: Has anything been upsetting her lately?

Daughter: I dunno. Maybe. Her parents are splitting up.

You: How would you feel in her situation?

You can see where we’re going with this. Instead of empathizing with your daughter, encourage her to empathize with the person she’s unhappy with.

Blaming habits don’t change overnight. But with practice, your daughter will begin to view the world through a sunnier lens. Not only will she stop feeling victimized by ‘what other people do to her,’ she will experience the feeling of kindness, which has its own reward.

ERIKA SAYS: It’s beautiful that your daughter feels comfortable and safe enough to share everything with you. Still, part of me wonders if she does so because she can count on you to agree with her. The importance of having a H.O.T. (honest, open, and transparent) relationship with someone is that you’re committed to being honest with them, even when they’re wrong.

Agreeing with your daughter doesn’t teach her how to find solutions to conflict. Instead, it fuels a toxic, unproductive blaming habit.

Sometimes it’s easier to ‘throw someone under the bus’ than to say you messed up or played a part. By blaming someone else, your daughter is trying to get you to focus on the other person, not her. Encourage your daughter to recognize that not everyone will have the same interpretation, the same perspective, or the same experience as she does, and that’s okay.

She can only focus on what she can control: her own reactions, how to treat others, and how she makes others feel.

Change the tone of your relationship with your daughter to one where you can freely share your thoughts with her. She can only grow by hearing the truth, whether she likes what you have to say or not. When you’re having these conversations, shift the focus from the other person to her.

Ask questions like: What she could have done differently? What role did she play? What is she not seeing about the situation?

Listen, show empathy, take responsibility for your own life as a role model, and teach her how to repair. Repair can be particularly challenging because it pushes one to grow, which hurts sometimes. Ask her how she can improve when she’s in a rut with someone, rather than what the other person needs to do.

The goal is not to tell your daughter how to fix things, but rather, guide her. Ask the questions and let her mind do the turning. Make suggestions if needed. One of the greatest gifts you can give your daughter is to teach her how to solve problems, a skill she will use for the rest of her life.