ASK MOM: Am I Raising a Liar? 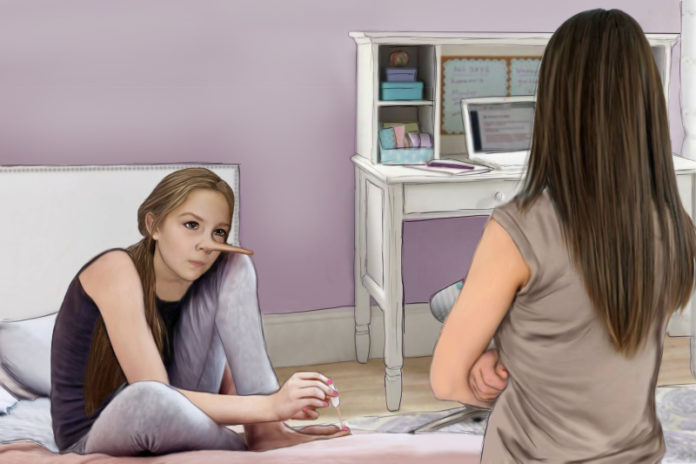 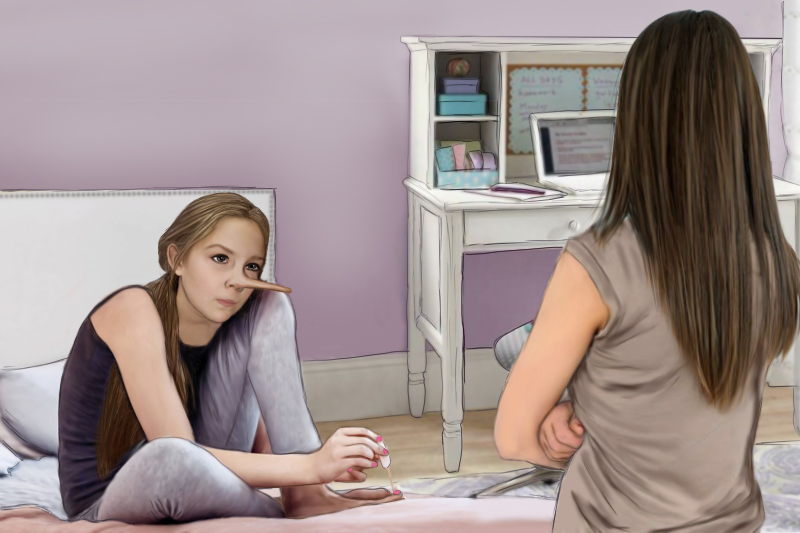 AM I RAISING A LIAR?

THE PROBLEM: My daughter (she’s in sixth grade) lies about everything. I can’t tell if she’s living in a dream world, or if she’s doing it on purpose. I sometimes wonder if she is just exaggerating to try and impress her friends, but she also does it with me. The other day, I asked her if she had done her homework, and she said ‘yes.’ But she knew I was going to have to sign-off on it later, and when I checked her workbook, it was blank. This sounds like a small thing, but it happens all the time. It’s not like she didn’t know I was going to check it! I punish her whenever I catch her lying, so she knows I don’t like it. But she only tries harder to get out of trouble by telling even more lies. Sometimes I get angry at her, but mostly, I’m afraid the problem is going to get worse unless I do something about it. I’m just not sure what to do.

MARY SAYS: Children lie if you let them. It’s perfectly natural, but that doesn’t mean it’s okay. So for starters, please don’t look at your daughter as though something is wrong with her. She is figuring out how to navigate a large—and often scary—world, which requires her to develop some pretty powerful coping mechanisms.

This is where you come in. As parents, we need to teach our children healthy ways to cope with uncomfortable situations. If your daughter is deceiving her friends to make them think better of her, she may soon find herself without friends. You didn’t say whether these friendships have been long-term, but most people won’t stick around when their trust has been violated more than once without some assurance it won’t happen again.

Clearly, your daughter’s inability to be truthful has become habitual. This tendency can sneak up on kids (adults too!) without them even knowing it. While this sounds odd, people can experience shifts in their world view—due to trauma, modeling, or lack of guidance—and their new reality becomes, well, real to them.

The first step is to have a direct conversation with your daughter. Tell her you’ve noticed a trend and you are alarmed by it. Give her examples—a whole list of them. Ask if she understands what you are trying to tell her and let her know that her behavior is harmful to the people around her—and to herself.

Tell your daughter that from now on, there will be zero tolerance for misstating or side-stepping the truth. This is where your skill as a parent will be tested. The next time she tells a whopper, resist the temptation to respond to what she’s saying. For example, when she tells you she’s done her homework (and hasn’t), avoid responding with: “How could you have done it? We haven’t even been home.” Or: “I already checked your workbook and there’s nothing in it.”

Instead, ask her to look you in the eye and answer the question again, this time, truthfully. In other words, rather than engaging in the content of what she’s telling you—arguing about homework—go straight to the context, the fact that she’s lying. Whenever your ‘lie-detector’ goes on high alert, your response to her should always sound the same. If she repeats her story, ask her to prove it to your satisfaction. With her reputation for false reporting, your daughter needs to understand that the burden is on her to regain trust, and that people may hesitate to believe her even when she’s telling the truth.

Finally, look inward. Have you ever told your daughter to answer the phone and tell whomever it is you aren’t in? Has she seen you fabricate an excuse for being late to an event? Missing a deadline? If so, these little lies may have created a climate where your daughter thinks ‘fudging’ is okay. Perhaps this as an opportunity to create a more honest way of showing up in your own life, one that could empower both of you.

KRISTI SAYS: Take a breath. Just because your daughter lies right now does not mean she will grow up to be a compulsive liar. I worry about the same thing when my kids go through a lying stage. And it’s just that—a stage. They grow out of it, but they also need reminders of the difference between truth and lies, and to understand the consequences when they lie.

In our house, the kids need to ask permission to be on their tablets. One day my 4th grader told me he was going to go read a book in his room. It happens a lot, so I didn’t think anything of it until I peeked in his room and saw that he was hiding under the blanket.

Me: What are you doing under there?

Me: What are you reading?

Me: What are you really doing?

Me: You know you’ll be in more trouble if you lie.

Him: **Hands the tablet out from under the covers**

I deal with lies early on, and I start by building trust.

When I catch my kids in a lie, I keep my voice calm and give them a lot of chances to tell the truth. I let them know that if they tell the truth, the consequences will be small. But if they lie again, they get in trouble for two things.

Instead of consequences, work alongside your daughter to complete the things you asked her to do. Say something like, “I can see you got distracted, let’s work on that assignment together so you can turn it in on time.”

Give her ample opportunity to share the truth even after she lies. Say something like, “I can see you’re having a hard time telling me the whole story. Can we start again from the beginning? This time tell me what happened without the parts that aren’t true.”

Remind her of the importance of being honest.

Some of the things I like to ask are, “Did this happen by accident?” or “Did you forget?” It helps to diffuse the situation, but also lets them know that I know SOMETHING happened. I follow up with, “accidents happen, but it’s important to tell the truth about them” or “I forget things sometimes too, so let’s do it right now so we don’t forget again.”

Take a moment to praise your daughter when she tells the truth. Make sure she knows how proud you are when she’s honest. All children lie, it’s part of development. But they learn to be truthful when it’s modeled and reinforced.

As Grymes Memorial School prepares to celebrate its 75th anniversary in 2022, it is certain the past two years will be an important chapter...
Read more
Sponsored Content