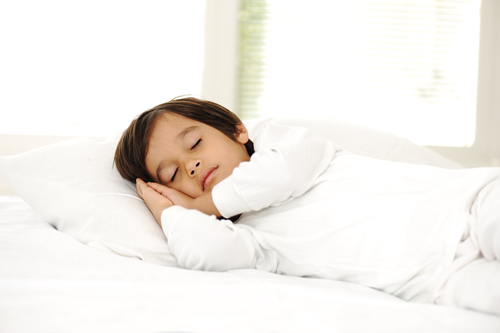 How does sleep boost learning? Researchers believe it has to do with the way the brain processes information during sleep. Michigan State University researchers found that children can even learn while they’re asleep as the brain integrates new information and memories. Researchers from University of Florida discovered that newborns learn in their sleep, and new research from the American Academy of Sleep Medicine shows that sleep helps students perform better on tests.

Sleep by the Age

Here is age-specific information on how sleep impacts learning—and how to help kids get a better night’s rest.

Even modest sleep deprivation is enough to hinder learning. According to a study published in the journal SLEEP, a mere hour of lost slumber is enough to bring on inattentiveness and hyperactivity in young children. A 2011 study of 6- and 7-year-olds shows that language skills, grammar, spelling and reading comprehension suffer when kids get less than nine hours of sleep per night.

Sleep-deprived children may not appear sleepy, says Shelby F. Harris, Psy.D., director of the Behavioral Sleep Medicine Program at Montefiore Medical Center in New York. In fact, they may act hyper and goofy. But preschoolers and school-age children don’t outgrow the need for a consistent bedtime and bedtime routine. Establish an age-appropriate bedtime that allows your child to rest for 10 to 11 hours each night.

During the late elementary and middle-school years, academics become more challenging and sports more competitive. But when increasingly busy schedules start cutting into sleep, kids retain less of what they learn, says Mark Splaingard, M.D., director of the Sleep Disorders Center at Nationwide Children’s Hospital. “Long hours spent on sports practice or math problems are counterproductive, if these activities keep kids up late at night,” he notes. Kids will learn more and perform better—whether on the field or in the classroom—with sufficient shut-eye.

Parents need to understand sleep’s importance and guard kids’ sleep hours zealously, says Splaingard. That means maintaining firm school-year bedtimes and choosing after-school and evening activities that end at least an hour before kids need to wind down for bed.

But busy schedules deserve only part of the blame for sleep deficits: cell phones and laptops keep teens up late, often into the wee hours. When teens finally power off their computers and go to bed, round-the-clock access to cell phones disrupts sleep. A new study reports that sleeping near cell phones puts teens at risk for so-called “sleep texting:” waking up and firing off text messages during the night without any recollection of having sent the texts the next morning. All this sleep disruption adds up to bleary mornings and bleak report cards.

Protect teens’ precious sleep hours with a media curfew—shut down all electronics an hour before bed and establish a “charging station” outside the bedroom where teens leave their electronics overnight. This important step keeps bedrooms free of sleep-disrupting cell phones and computers, says Harris. “The bedroom should be a place for sleep,” she says. “It’s not a spot for homework, watching TV or surfing the Internet.”

Malia Jacobson is a nationally published journalist and mom of three. Her latest book is Sleep Tight, Every Night: Helping Toddlers and Preschoolers Sleep Well Without Tears, Tricks, or Tirades.