A lot has been written about millennials, young men and women who, throughout school, were so dependent on parents, praise and electronics that they have come under scrutiny for not being able to be self-sufficient. Some of this is true. Some of this is typical generation bashing. In the worst cases, two of the contributing factors to this phenomenon have been helicopter and snowplow parenting. Helicopter parenting is when a parent hovers over a child, micromanaging responsibilities. Snowplow parenting is when a parent removes any obstacles from a child’s path. Helicopter and snowplow parenting may solve short-term problems, but have the potential to create serious problems later on, as more and more college students who grew up with this kind of parenting suffer from low self-esteem, depression and anxiety, and are more likely to engage in risky behavior, such as smoking and binge drinking. These often occur as a result of the lack of coping skills that are not developed when a child is over-parented. 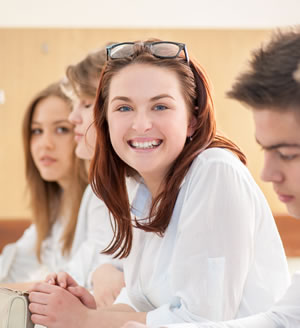 According to Getting it Wrong: Surprising Tips on How To Learn, “Trying and failing . . . is actually helpful to learning. It’s an idea that has obvious applications for education,” as well as all areas of life.

While supporting your student who is habitually forgetful or who has been diagnosed with ADHD is important, remember that bailing some children out teaches them that they can expect support systems to catch them when they fall and they never learn to grow from failure. Use these mistakes to allow them to learn coping mechanisms and problem solving skills, both of which can result in greater resiliency, creativity and maturity.

While shyness and introversion are understandable natural personality traits, the ability to advocate for one’s self is also a natural progression of maturity. High school age students should be able to talk to a teacher or a boss about a variety of issues, from low grades and difficulty understanding material to job performance. Again, it’s OK to properly provide support, advice and feedback to your child about these issues, but doing it for him promotes over-reliance on someone else.

According to Teen Discipline: Don’t Micromanage Your Teen by Elaine Bowers, too little involvement can result in the surprise “D” on the report card . . . but micromanaging can cause push-back from a resentful teenager, resulting in more serious problems.

Barring extreme examples, insisting that your child’s bad grades are the result of single teacher’s class, accusing a teacher of bias against your child and, when that doesn’t work, demanding that an administrator intervene is harmful. Yes, perhaps a grade might be changed, but the student has not learned anything, and in the long term this can lead to a variety of problems.

While shyness and introversion are understandable natural personality traits, the ability to advocate for one’s self is also a natural progression of maturity.

If your high school aged child is struggling in a class, that’s OK! Education is about more than easily mastering material. Part of learning is also learning how to deal with difficult concepts and hard assignments. Support your child through this period of growth. Let him know that you’re not angry if he’s trying hard and not doing well. It’s also OK to partner with up the teachers. Ask them how you can help, and then work out an agreement with your child so that both of you are working together on the problem. Not only are you teaching your child the content, but you’re helping him learn how to deal with similar situations that are sure to arise later on in life—in college or in the workplace—in a healthy, productive manner.

It’s difficult to watch your child fail, and it’s even harder to watch your child suffer difficult people (teachers, bosses, administrators or roommates can be mean, unfair and just plain wrong), but the more parents micromanage and solve something that a child can easily solve on his own, the more helpless, anxious and prone to risky behavior they may become later in life. Instead, try to be more of a “submarine” parent: someone who out of sight and unobtrusive, but who can rise to the surface when support is needed. Not only will your teenager appreciate it (hopefully strengthening your relationship), but it will teach them how to be strong, creative and independent. And that’s something everybody wants!

*from “The Importance of Self-Advocacy For Kids With Learning and Attention Issues,” by Andrew M.I. Lee